The Tough One
The Smart One
Princess
Math Queen

Protect the City of Townsville.

The Mayor of Townsville

She is voiced by Natalie Palamides.

Buttercup's overall nature is being a vain, and stubborn girl, who's known to be a very violent, arrogant, and sometimes have shown to be narcissistic as well.

She is a 5-year-old girl, the middle sister, with black hair and green eyes. She wears a green sleeveless dress which has a black stripe running through the middle, white socks and black Mary Jane shoes. 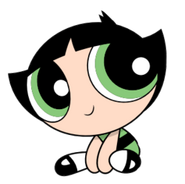 Buttercup in the intro.

Buttercup, Blossom, and Bubbles in the intro.