One of Bonnie's Toys

Buttercup is a character in the 2010 Disney/Pixar film, Toy Story 3. He is a plush unicorn who belongs to Bonnie. Although he has eyelashes that seem feminine, he is actually a male toy.

He is voiced by Jeff Garlin who also voiced Captain McCrea.

When Woody is taken by Bonnie with her Wally B. backpack, he accidentally finds Buttercup. He explains to Mr. Pricklepants why Woody is asking a question until Trixie butts in. That night, Woody and the other toys are on Bonnie's computer to find the address of Andy. The next day, Buttercup informs about how to avoid Lotso to Woody and the gang. After Andy gave his toys away to Bonnie, he and the other toys are happy that his toys are new residents of Bonnie's house.

Buttercup and his friends in a poster for Toy Story 3 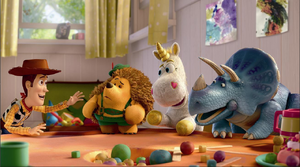 Buttercup with Woody, Mr. Pricklepants and Trixie in Toy Story 3