Buzzshock's appearance is similar to an earth dry cell. He is black, with green electricity and green eyes. He has a white large lightning like line from where his neck starts, to where his legs start on his front and back. He has a grey spot on his head (resembling a battery).

Buzzshock first appeared in Ben 10,000, where he defeated Dr. Animo.

In Ken 10, Ken used Buzzshock in attempt to fight Mot Snikrep before he was frozen by Ben 10,000 as Arctiguana. Later, Ken as Buzzshock briefly battled Kevin 11,000 before he reverted.

In Max's Monster, Buzzshock was unlocked by Phil so he could feed off him. He then powered up a Null Void Projector to defeat Phil and send him back to the Null Void.

Buzzshock in The Original Series 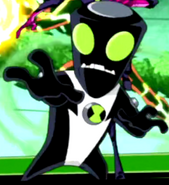 Buzzshock in The Ultimate Alien Intro