Byron is a major character in the book series and film adaptation The Spiderwick Chronicles.

Byron is a Griffin and is named after the famous Gothic poet Lord Byron. The Grace kids discover Byron at the goblin camp and rescued him. Simon takes care of Byron like any other of his pets until he becomes better. Byron helps out in the adventure of the Grace kids.

Byron was called upon with a summoning spell from Arthur Spiderwick's Field Guide. He took the Grace kids to Arthur and left.

When the Grace kids first found Byron at the goblin camp, he was unable to move and in great distress. Byron had a deep gash running down his left flank. This was not caused by the goblins, although they had attacked him in a cowardly way with their pointed sticks.

Simon believed he must have been hit by a truck on Rountree Street and had dragged himself into the woods. Without "the Sight" the truck driver would not have been used to traffic as griffins normally live in isolated mountain or desert regions.

Once the Grace kids had taken him to the carriage house, Simon was able to clean his wounds with antiseptic and apply clean dressings; which then healed themselves remarkably quickly. This seems to be one of the Griffins' magical properties, probably related to the fact they are immune to the venom in a dragon's bite (as the kids saw when he later defeated the dragon outside Mulgarath's lair).

Byron's wingspan is roughly 12 feet (around 4 m) from wingtip to the wingtip. The feathers on his wings are the largest on his body, measuring up to 3 feet 4 inches (1 m) long. They vary in color from dark brown to dark blue.

The shaggy mane around Byron's neck consists of rough hair and feathers, which provide an armor padding that protects the vulnerable areas of his neck and chest.

When Byron was recovering, he consumed a huge amount of food every day-the Grace kids' mom was wondering why the pantry was always empty. In a single day he could eat:

Once he had recovered enough, he was able to fly free and hunt for himself, which is just as well or the Grace family would have starved!

(Byron was also known to eat baby dragons after he recovered)

Griffins appear to be part lion, part eagle (though, it's said Byron look more like a hawk). They have the powerful hind legs of a lion, which they use to launch themselves into the air. Their lions' claws are very sharp and are extremely useful in battle. They also have the talons, wings, and beak of a bird of prey.

Byron's beak is a fearsome weapon. Even in his weakened state, one nip was enough to sever the arm of a goblin when it attacked him.

Byron has large, feather tufted ears that allow him to hear the slightest movements of potential prey from distances in excess of two miles.

Unlike many normal bird species, griffins have binocular vision, both of their eyes face forward. This gives them excellent eyesight. When flying at great heights, a griffin can spot the smallest of prey moving on the ground.

The sharp talons of a griffin can viciously tear flesh but also are able to grip quite gently. Byron swooped down to pluck a salmon from the river, catch small prey like rabbits, and he is certainly strong enough to carry off larger prey like sheep or deer. 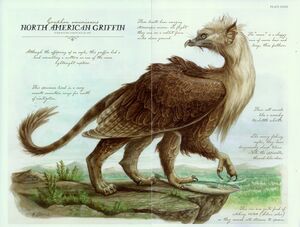 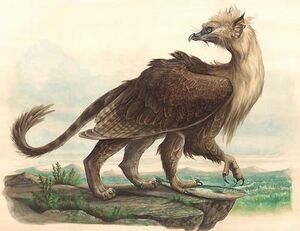 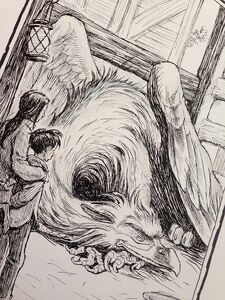 Byron in the books. 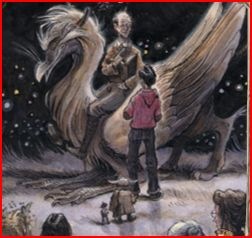 Byron along with Arthur Spiderwick. 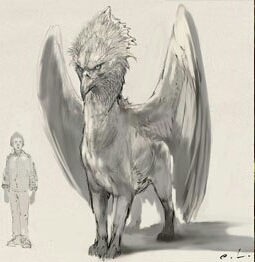 Size comparison between Byron and Jared 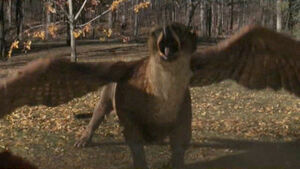 Byron in the film adaptation. 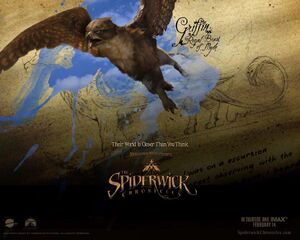 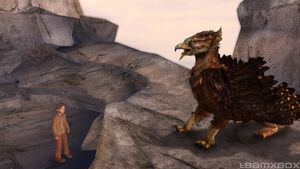 Byron in the video game.