Miller
Private Miller
The Old Breed (with Sullivan and Roebuck)

Call of Duty: World at War

Private First Class C. Miller (b. August 2, 1922), is one of the main protagonist (alongside Dimitri Petrenko) in Call of Duty: World at War, and is the playable character in the Pacific campaign.

C. Miller was born on August 2, 1922, and later joined the United States Marine Corps to fight against the Japanese in World War II. Miller became a member of the Marine Raiders, and fought in the Pacific theater of the war, meeting Sergeant Tom Sullivan and Corporal Roebuck. In September of 1942 to January 1943, Miller fought in Guadalcanal alongside Sullivan and Roebuck, as it's seen on his dossier.

Miller was part of a reconnaissance team that was captured by the Japanese on Makin Atoll, he was tortured alongside his men, and witnessed the brutal of Private K. Pyle. However, he is saved by Roebuck and Sullivan, who come with the Marine Raiders to assault the Japanese base. The Marine raiders cause massive destruction on the Japanese base, and move to a extraction point, but Miller is wounded by a Japanese soldier, but is saved by Sullivan.

Years later, Miller and the marines fought at Cape Gloucester, and later recruited Polonsky and members of the 1st Marine Division to storm the white beach of Peleliu Island. During the last stage of taking the beaches, Sullivan was killed by a Banzai Charger, and Roebuck was promoted to sergeant, and the squad succeeded in securing the Peleliu Airfield.

Months later, Miller and the squad take part in the invasion of Okinawa, and the group decimate the Japanese forces at the Wana Ridge. Later on, the group work with the 1st Marine Division in storming the last Japanese stronghold on Okinawa, Shuri Castle. In Miller's last mission, he is forced to either save Roebuck or Polonsky from Japanese soldiers, who faked surrendering and had grenades pinned to them.

No matter who is chosen, Miller and the squad have to fight Japanese soldiers until reinforcements stop coming, and Roebuck/Polonsky give Miller the dog tags of who was killed. Roebucks' voice can be heard n the background (no matter if he was chosen or not), saying they can all go home. 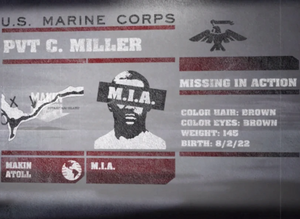 Dossier during Semper Fi Intro
Add a photo to this gallery

Retrieved from "https://hero.fandom.com/wiki/C._Miller?oldid=1922738"
Community content is available under CC-BY-SA unless otherwise noted.