Help Marth in his quest

Spouse of the Protagonist

Shiida (シーダ Shīda, romanized Sheeda in the official Japanese material such as the TCG and the Fire Emblem Museum, translated Caeda in the American version, Sheda in the English version of OVA, and Shida in the Italian version of OVA) is a playable character in Fire Emblem: Ankoku Ryū to Hikari no Tsurugi, Fire Emblem: Monshō no Nazo, and their remakes. She also appears as a SpotPass character in Fire Emblem: Kakusei. She is the pure-hearted princess and Pegasus Knight of Talys, and the childhood friend and later wife of Marth. She joins Marth in his quest, staying by his side most of the time and is also responsible of recruiting various people, including Castor, Nabarl, Roger, Jake and Lorenz. In the end of Marth's battle against Medeus, Shiida eventually becomes Marth's fiancée.

Several years after the battle, Shiida moved to Altea and was welcomed warmly. Unfortunately, shortly after Marth left on request of King Hardin, Altea was attacked and was mostly taken over. Marth's sister, Elice, surrendered herself, giving Shiida a chance to escape and to reunite with Marth. Once again, she accompanied Marth in his new quest and eventually in the end of it, they were married. She is 14 in Ankoku Ryū to Hikari no Tsurugi and 17 in Monshō no Nazo according to the novelization by Takayashiki Hideo. 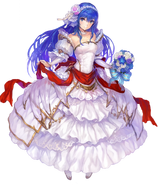