Caesar (Original Planet of the Apes)

Escape from the Planet of the Apes

Protect his people from evil threats.

Escape from the Planet of the Apes

"Milo" (named after his parents' friend Dr. Milo) was born as the son of the evolved chimpanzees Cornelius and Zira after they travelled back in time to the Earth of Taylor's era following the destruction of their future world.

As the infant was feared to be the cause of the future where his parents originated, Milo was raised by circus owner Armando after Zira switched him with a young chimpanzee recently born to Armando's primitive chimpanzee, Heloise, prior to his parents' death by the action of the human Dr. Otto Hasslein. As Hasslein killed the infant with Zira deposing of the body, Milo was assumed dead and was raised by Armando as a mute acrobat who was renamed "Caesar".

Conquest of the Planet of the Apes

Two decades afterwards, Caesar (now an adult) and Armando maintained a charade by having Armando keep him on a chain as a pet, while Armando secretly educated Caesar on the events that led to the apes' state of slavery. Caesar is later taken to a city for the first time and sees groups of chimps and orangutans being dispersed, scolded or punished for honest mistakes or for exhibiting apelike behavior.

Upon seeing this barbaric treatment of his people, he impulsively cries out "Lousy human bastards!", catching the attention of the police men tormenting the other apes, and with Armando attempting to convince the law enforcers that he was the one who had said that, but Caesar panicked and ran away in the commotion, with Armando bluffing his way out of trouble and deciding to have him join an arrival shipment of apes.

Passing his conditioning with complete success, Caesar is held at an auction and sold to Governor Breck. He is supervised by Breck's assistant Mr. MacDonald. Later on, Breck brings out a reference book as a means to formally name him, giving the ape the option. Caesar searches and chooses his adopted name "Caesar" under the guise of a random picking. Caesar is then assigned to the city's "Ape Management" command post and its lockup for disobedient apes, where he is also selected to mate with the ape Lisa.

After learning of Armando's death while in custody, Caesar plotted an ape revolt and convinced the other apes to join him, but Caesar was belatedly traced, and was soon captured and then interrogated and tortured by Breck, who forced him to expose his identity as the offspring of Cornelius and Zira. Just as Breck is about to execute Caesar on an electroshock table, MacDonald excuses himself from the scene and turns off the breaker settings for the electroshock table, where Caesar pretends to be dead before he kills the handler. The revolt begins shortly after, and within hours, the city is in flames, the police and military have been beaten down, and the apes are now in control.

Caesar predicted that word would spread of his revolution and the same thing would soon happen around the world. Despite MacDonald's pleas to prevent further violence, Caesar declared that humanity will destroy itself and the apes will become the masters of the world, only to cease when Lisa musters the ability to speak, convincing Caesar not to condemn all of humanity.

Battle for the Planet of the Apes

29 years later, after Caesar led the revolt, and 12 years after the world got destroyed by a nuclear war, Caesar took his apes and the remaining captive humans and they started a new civilization together in the countryside.

Even though apes and humans were peacefully coexisting, Aldo, a gorilla, opposed Caesar since he despised the humans. Wanting to know about his parents, Caesar traveled to the ruined city to find the archives about his parents, accompanied by the younger brother of the late MacDonald and his ape advisor Virgil.

After learning who they were and more importantly learning about the eventual destruction of Earth, Caesar managed to escape the city when he, MacDonald and Virgil were attacked by a group of mutated, radiation-scarred humans led by Governor Kolp who had survived and were living in the ruined city.

Meanwhile, Aldo plotted to overthrow Caesar and have the gorillas take control of the ape-human village. Caesar's son Cornelius eavesdropped on Aldo and the gorilla kills the young ape in the process. Using Caesar's grief and absence, Aldo and his gorilla army imprison all the humans in the village raid the armory to prepare for battle against the Kolp and the mutated humans, as well as overthrow Caesar.

When the mutated humans launched their attack on the village, Caesar and the apes managed to defeat and capture many of them. Kolp and his remaining forces tried to escape but are killed by Aldo and his troops. Caesar defends the imprisoned humans when Aldo tries to kill them and the gorilla threatens Caesar. When Virgil reveals that Aldo has killed Cornelius, Caesar becomes furious and fights the gorilla, chasing him up a tree which leads to Aldo's fall and death. Realizing that apes are no different from humans, Caesar agrees with MacDonald that humans are to be treated as equals in order to coexist. 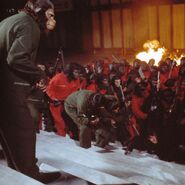 Caesar and the other apes.