King of the Ape Colony

Protecting his people
Leading his tribe whenever needed

Stay with Will (formerly).

Be set his fellow apes free (succeeded).
Protect his people from evil threats (failed).
Kill Koba for his betrayal (succeeded).
Kill the Colonel McCullough (formerly, but succeeded, as the Colonel killed himself).
Bring the peace between humans and apes (failed, later presumably succeeded).

He was portrayed by Andy Serkis through full motion capture performance. Serkis also played the villain Gollum of the Lord of the Rings series and the anti-hero King Kong in the 2005 remake both through motion capture, and Captain Archibald Haddock in The Adventures of Tintin.

Caesar was an immensely intelligent chimpanzee who commands respect and loyalty from all those that encounter him. From his various ages, Caesar's personality changes.

As an infant, Caesar was very curious, his curiosity grows as he gets older and sometimes gets him into trouble.

As a young chimpanzee, Caesar was very playful, adventurous and carefree.

However, as a teenager, Caesar was much more mature, displaying human emotions, such as happiness, anger and independence. He also displays a resentment for most humans after he learns the truth about his origins and his mother's death. At the beginning, Caesar had a good relationship with humans due to being raised by Will and Caroline, but by the end, Caesar had grown to despise most humans mainly because of their behavior towards his fellow apes. His relationship with his people is much better. He is devoted and protective of his fellow apes. Caesar had proven on several occasions to be a great leader, displaying charisma during the battle on the Golden Gate Bridge, and willing to sacrifice himself for the sake of his army.

Caesar was also compassionate, these emotions, however, can cause him to attack anyone who dares to try and harm the people he loves, this was proven on several occasions usually involving humans and apes, on the first occasion, he viciously attacks Hunsiker who assaults a confused Charles, during the incident, Caesar bites off of Hunsiker's right index finger by accident, a trait that all apes share when it comes to humans, but becomes horrified by his actions and is consoled by Charles. On the second occasion, Caesar refuses to return to his cage and is confronted by Dodge, growing more and more furious at the man's insults, he shocks everyone by speaking for the first time and by unintentionally killing Dodge. Although Caesar hated the man, he did not intend to cause his death. His death causes Caesar to experience survivor's guilt, but it also leads him to vow to kill only the humans that did wrong to him and his people, not those that did no wrong. He also begins to teach his people to do the same.

Although he loves and adores his adoptive father, Will. Their relationship eventually becomes strained to the point where Caesar starts to feel abandoned by Will and when Will attempts to reclaim him, Caesar refuses to go home with him, no longer wishing to be treated as a pet and preferring to stay with his fellow apes. During the battle on the Golden Gate Bridge, Caesar witnesses the deaths of many of his fellow apes, including his loyal friend, Buck, who sacrifices himself in order to protect Caesar. Caesar experiences sorrow and pain over Buck's death and also displays ruthlessness and cruelty when he refuses to save Jacobs who was, although indirectly, responsible for Buck's death. Instead of killing the man himself, Caesar chooses to allow Koba to kill Jacobs, which also displays that Caesar can be merciless but also vengeful. Although Caesar could have returned to the only home he has ever known, he ultimately chooses to live in the redwood forest with his fellow apes, choosing a life of freedom over a life of solitude. During the early days of the Ape Colony, initially, Caesar became slightly arrogant, impulsive and a control freak, however, by the time of the events of Dawn, he had become mature to the point where he was no longer the arrogant, impulsive and control freak chimpanzee he once was. As a middle-age chimpanzee, Caesar was wise and well-respected by his people who see him as more of the all-father than the king. He was the ultimate leader. He combines intellect and ability, confidence and humility, strength and compassion. It's this unique mix of rare qualities that inspires others to follow. At the same time though, he was not afraid to assert dominance if another ape defies him, seeing it as a challenge to his authority (such as when he nearly strangled Koba after the latter accused Caesar of caring for humans more than apes and his own family, in front of his fellow apes including his son, Blue Eyes).

As a husband, he loved his wife, Cornelia, and shares an affectionate relationship with her. As a father, he loved both of his sons, Blue Eyes and Cornelius, sharing a strong bond with and sometimes having problems with his eldest son, but also becoming a counterbalance to Blue Eyes' recklessness. Caesar was fiercely protective of his family and will never hesitate to protect them when they are threatened, he will even go as far as to attempt to kill to protect his loved ones. This was proven when he almost kills Carver who threatened the lives of both of his sons.

As the king of a growing empire, Caesar had many responsibilities that can be very stressful since he had to try and juggle between being a husband, a father and a king. However, he had Cornelia's constant support; her presence also helps keep him grounded and calm in important situations. He had since developed a strong moral code and principle, apes do not kill apes. He was fiercely loyal to the moral code, proven when he almost kills Koba after the latter accuses him of loving humans more than his people and his family, but ultimately spares his life. Caesar was also very forgiving even if he had been deceived or disrespected, proven when he forgives Koba twice for his indolence. Despite his resentment for most humans, Caesar still possesses compassion and sympathy for the humans, proven by his friendship with Malcolm, but also because he was raised by the Rodman family who showered him with nothing but love and kindness.

Caesar was once naïve, believing that apes were better than humans, but after Koba's betrayal, Caesar realizes that there is no difference between the two species. Caesar still possesses some of the personality traits when he was a teenager, such as violent mood swings, although he had learned to control himself. He was a terrifying spectacle when he was enraged. Ultimately, Caesar still displays a dark side, as he can be vicious, cold, cruel, callous, brutal, ruthless, aggressive and stoic towards his enemies; evidenced by the fact when he chooses to let Koba fall to his death, after declaring that he was no longer an ape and because he has destroyed any chance for peace between the apes and the humans, forcing Caesar to have to prepare his people for war. Over the next two years throughout the final human-ape war, Caesar preferred to use speech to communicate, and struggles to maintain his compassion and sympathy for humans as his fellow apes suffer. When his peace offer was met with the assassination of his own son, Caesar became full of vengeance, going on a vendetta to kill McCullough, even abandoning his apes to do so. He (apparently) became uncaring towards humans, killing one without a second thought and would have left Nova to die had Maurice not convinced him otherwise. Caesar eventually warmed towards Nova, but his hatred of McCullough kept him from getting closer to her. When his group found a dying soldier, Caesar showed some of his former compassion and sympathy, and upon learning the soldier wouldn't live, mercifully killed him. Still, Caesar admitted to Maurice and Rocket that he had grown to be like Koba, struggling to escape the darkness in his heart. This elevated further when Luca died protecting him, Caesar ordering Maurice and Rocket away to finish the mission alone. However, when it came down to it, he was unable to shoot McCullough, displaying he hadn't truly been consumed by utter hatred.

Caesar also maintained his love for his apes, defying Red's treatment of one, standing against him and McCullough, enough to inspire his group to do likewise. Caesar was also disturbed by McCullough's murder of his own fellow humans, believing the man was cruel and disturbed. Ultimately, Caesar still maintained his compassion and sympathy for humans while leading his apes to freedom.

Caesar forced to sacrifice his personal dream for sake of his fellow inmates.

Caesar releasing his stress over his problem in Primate Shelter. 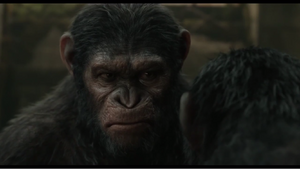 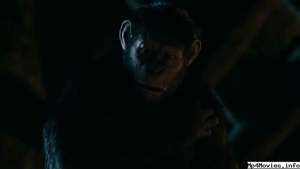 Caesar has been betrayed by Koba. 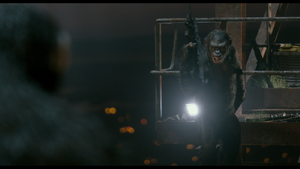 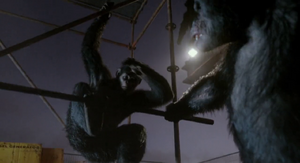 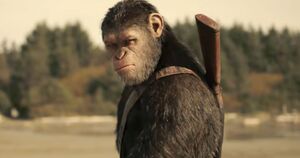 Caesar in War of the Planet of Apes.

Caesar's death
Add a photo to this gallery
Retrieved from "https://hero.fandom.com/wiki/Caesar_(Planet_of_the_Apes)?oldid=1869610"
Community content is available under CC-BY-SA unless otherwise noted.