Get information on AVALANCHE (reformed)

Cait was voiced by Hideo Ishikawa in the Japanese version, and by Greg Ellis in the English version.

Cait Sith is met at the Gold Saucer as seemingly a staff member who upon giving Cloud and Aerith an ominous fortune is perplexed about it's meaning and wants to accompany them to find out it's nature. As Cloud, Aerith and the rest of AVALANCHE are somewhat lost within Gold Saucer, they let the apparent freak-encounter with the staff member work towards showing them around in there quest to follow the trail of their ominicidal foe, Sephiroth, but are blown off course when mistaken as the culprits of a murder scene by the renegade Dyne. Cait Sith is thrown into the detention center for his association with apparent murderers and must work with them to corner Dyne. Dyne ends up taking his own life and AVALANCHE is cleared of the crime and freed after a Chocobo race to make the Gold Saucer money off Cloud as a rider to make letting them out worth their time. Once freed from the North Coral detention center, Cait Sith has been part of the side-tracked series of events for long enough no-one thinks twice about why he is following them.

It is later revealed why Cait Sith was following AVALANCHE long after the events of Gold Saucer and why the Shinra security force of The Turks kept following them.

AVALANCHE return to Gold Saucer to pain-painstakingly recover the Key Stone, an ancient relic that opens the Temple of the Ancients to follow Sephiroth. The ride to/from Gold Saucer breaks-down and Cait Sith smooths over things with the owners to score AVALANCHE a free room while the repairs are going on. Over the course of the infamous Date-Sequence, Cloud and his date notice Cait Sith as they are coming back from their date... with the Key Stone. Cait Sith dashes off to a Shinra-chopper with the head of the Turks, Tseng inside, whom Cait Sith tosses the Key-Stone too. Cait Sith is caught in the act and admits he is a spy for Shinra. Even when Cait Sith is threatened he states AVALANCHE's threats of violence are wasted on him as he is a robot, and the real-person controlling the robot was far away, as such destroying him would be meaningless; Furthermore Cait Sith insists that he be allowed to keep tagging along as Shinra had found Barret's daughter Marlene and were holding her and Aerith's mother hostage. Cait Sith insists they are safe and well taken-care of but if anything happens to his robot, Shinra will likely execute their hostages. With no choice, AVALANCHE must keep allowing Cait Sith to follow them. At the Temple of The Ancients, it turns out the only way to uncover the true power of the temple's secret is for someone to trigger the altar at the center which will turn the entire temple into the powerful Black Materia by shrinking it down into a hand-held bauble. Cait Sith volunteers to sacrifice himself to be the one to trigger the Black Materia. As Cait Sith is a robot his sacrifice makes the most sense pragmatically, but additionally he wants to make-up for having to turn on AVALANCHE.

It is eventually revealed who Cait Sith is, the Shinra executive Reeve Tuesti. Reeve was part of Shinra's board of directors as Head-of-Urban development. Reeve was against most of Shinra's worst policies, at first mainly for pragmatic concerns like P.R. and over-expenses, but soon enough the company's power-lust at the expense of all else makes Reeve sick to his soul towards his fellow board-member's actions. Reeve has multiple Cait Siths and with Shinra covering their expenses and writing them off as keeping AVALANCHE under-control, Shinra was happy to continue to pay Reeve to "pretend to be AVALANCHE's ally". By the time the Black Materia is used to summon the planet threatening Meteor, Reeve formally joins AVALANCHE over Shinra and starts turning on the other executives. At the point of his formal betrayal, Shinra is already too occupied with stopping Sephiroth too to care about who is on what side and stopping Meteor is all that matters to them, so Reeve gets in little to no trouble with the company's collapsing infrastructure.

Cait Sith is an anthropomorphic remote-controlled plush toy cat standing just over three feet tall with short black fur and a white stomach and face. He wears a short red cape and white gloves and a small crown. Cait Sith usually rides on a giant, fat stuffed moogle, which he animates with magic.

As he is merely a robot controlled by Reeve Tuesti, Cait Sith's character can be difficult to perceive. Cait Sith does act noticeably different from Reeve, in particular, his speech patterns are looser, and in the English versions of Final Fantasy VII: Advent Children and Dirge of Cerberus -Final Fantasy VII-, he has a Scottish accent while Reeve does not. Final Fantasy VII 10th Anniversary Ultimania elaborates that because Reeve is the one operating him, the Cait Sith in the Japanese versions speaks with the unique accent of Reeve's original Kansai dialect. 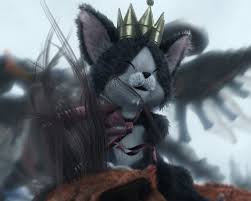 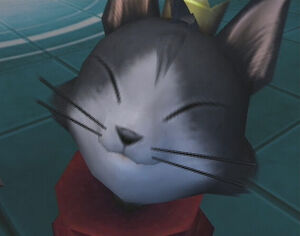 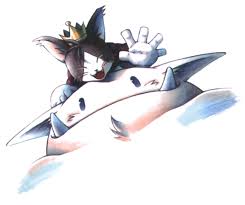