Leader of the Demon Ministers

Restore the balance of the realms.
Defeat the other Demon Lords and restore the Demon Realm. (formerly)
Defeat Magister and Taboo.

Calamity is the major heroine in the video game, Valkyrie Crusade and is also one of the major protagonists in the game. She also serves as an ally of the Valkyries.

She was also one of the Demon Lords who ruled the Demon Realm and was a childhood friend of Demise until she was accursed with the Miasmic Curse, which resulted her to become dangerous to anyone who come into contact with the curse. This prompted her into sending her Demon Ministers to find the cure in order to dispel the Miasmic Curse from her body, though she sometimes show up and helped the Valkyries in several occasions.

Despite being the Demon Lord, Calamity is actually a kind-hearted, caring, gentle and cheerful person who cared for friends and allies, especially the Demon Ministers, whom she led. However, she can be sometimes very harsh and strict when the ministers caused a lot of troubles as she does not hestiate to punish them, though she sometimes gave them valuable lessons at the same time.

After her body was cursed with the Miasmic Curse, Calamity became very pessimistic as she isolated herself from anyone else in order to prevent them from suffering her curse. She then send her ministers to find the cure to dispel the curse from her body.

After being cured of the Miasmic Curse, Calamity's old personality resurfaced once more and she became more cheerful and determined at the same time.

Despite her good-hearted and gentle personality, Calamity was not above losing her temper as she became angry when her friends and the Demon Ministers were threatened by her enemies as she lashed out towards them. However, she also have her limit on her actions as she refrained herself from doing so.

She was also a pacifist as she believes that the war in the Demon Realm will end if she joined forces with the other Demon Lords with understanding and friendship in order to battle against Taboo. 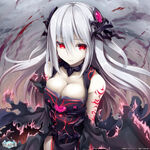 Calamity in the wallpaper.

Fan art of Pres Calamity.
Add a photo to this gallery

Retrieved from "https://hero.fandom.com/wiki/Calamity?oldid=1840491"
Community content is available under CC-BY-SA unless otherwise noted.