To put an end to the evil plans of Team Flare (game and manga; succeeded)

Calem (Japanese: カルム Calme) is the male player in Pokémon X and Y. His female counterpart is Serena.

Calem is a bit tall for his age and thin boy, and has straight, chin length black hair with gray eyes and wears a dark red hat with sunglasses. He also wears a blue track jacket with white stripes, navy blue slim fit pants, and black boots with blue laces. He carries around a black messenger bag with blue decals on it. He has a Mega Ring on his left wrist.

If Serena is the player character, Calem appears as an NPC, and does not wear a hat.

Calem is a teenage boy who lives in Vaniville Town with his mother, Grace, and his friends Tierno, Trevor, Shauna, and his next door neighbor Serena. The five of them form a bond almost instantaneously and they decide to go on their Pokémon adventures together.

Calem appeared in Pokémon Generations, where he was seen battling AZ with his Charizard and his Chesnaught, but he was defeated.

Calem's counterpart in Pokémon Adventures is X. When he was young, X won a Kalos Junior Tournament. However, the pressure of being a celebrity at a young age had its effect on him and he became a shut-in. Later, he decided to go on a journey with his friends, Y, Shauna, Tierno and Trevor after Xerneas and Yveltal went on a rampage on their hometown, Vaniville Town. 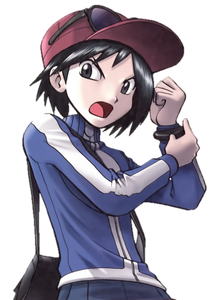 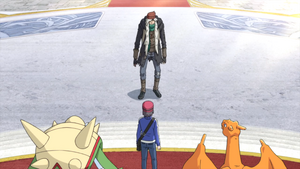 Calem with his Pokémon in Pokémon Generation 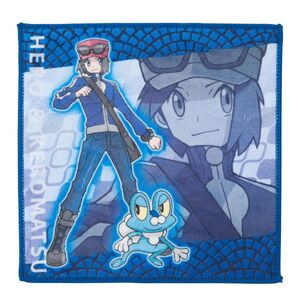 Calem and his Froakie Handtowel