Dealer in the black market (formerly)

Mutant
Caliban is a minor character from the 2016 film X-Men: Apocalypse and a supporting protagonist/anti-hero from the 2017 film Logan.

He is a mutant who locates other mutants for a price and has a tendency to address himself in third-person. In the revised timeline, he works as a dealer in the black market alongside his bodyguard Psylocke, who left him under Apocalypse's thrall.

In the year 2029, he became a caretaker for the ill Charles Xavier, along with Logan Howlett. Caliban goes on the run alongside Logan and Xavier with X-23 in tow while being pursued by The Reavers, led by Donald Pierce. In an attempt to kill X-24, a clone of Logan, Caliban detonates a pair of fragmentation grenades, killing himself in the process.

He is portrayed by Tómas Lemarquis when he is younger and by Stephen Merchant when he is older.

During one of his business ordeals, Caliban helped Mystique locate Nightcrawler. After the mutant later returns, Caliban advises her to take Nightcrawler to Xavier's school before cryptically informing her of Erik's return.

Later, Caliban is approached by Apocalypse and Storm. Caliban, however, does not identify En Sabah Nur, and stated he doesn't know who he is. When the mutant broker asks if he has any money, En Sabah Nur says he doesn't have any currency, and demands him for help. Caliban then pulls a gun on Apocalypse, but he disintegrates it. Psylocke then protects Caliban from him. Apocalypse then recruits his assistant, Psylocke, as the second member of his Four Horsemen.

Caliban is recruited by Logan to take care of Charles Xavier in exchange for shelter and protection in New Mexico. He often puts himself at risk when caring for Xavier, being victim to Xavier's frequent seizures that freeze him and nearly chokes him to death. When Laura is inadvertently taken back to their shelter and Donald Pierce is knocked out by her, Caliban is tasked by Logan to dump Pierce outside the shelter. Before he can do this, Caliban is held at gunpoint by Pierce, and the Reavers capture him. When Logan, Xavier and Laura escape his clutches, Pierce tortures Caliban to track them by exposing him to sunlight, severely burning him and taunting Caliban by saying "Beware of the light".

Caliban does track them, but he manages to give partially significant information. He ultimately lead the Reavers to Oklahoma City, where he and the people around him are victim to Xavier's seizure. After failing to capture Logan, Xavier and Laura, Caliban is visited by Dr. Zander Rice, the surgical head of Transigen. Rice convinces Caliban to cooperate when he promises him that the Reavers will only take Laura and not harm either Logan or Xavier.

Reaching the Munson farm, Caliban is shocked to discover that Rice has released an identical clone of Logan, X-24, to kill Logan and Xavier. Deciding to rebel against them, Caliban takes control of X-24's mind, and causes X-24 to kill a few Reavers. He takes two nearby grenades into his cage. Taking the pins out, he tauntingly says to Pierce, "Beware of the light", and throws them at Dr. Zander Rice and on Pierce. The grenades explode, killing Caliban and a few Reavers. However, Pierce and Dr. Zander Rice have survived the explosion.

Caliban's charred body is later seen in the Transigen facility. 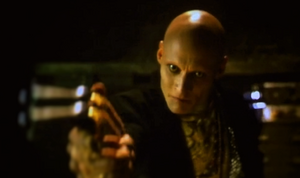 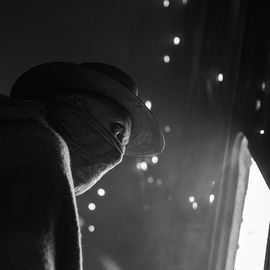 Caliban is tortured by Donald Pierce

Caliban at the X-Men Movies wiki