Calico "Callie" Briggs is a supporting character in SWAT Kats: The Radical Squadron.

She is voiced by Tress MacNeille, who also voices Babs Bunny in Tiny Toon Adventures.

As well as being Deputy Mayor of Megakat City, and the one who does the real work at City Hall, Callie Briggs is also the SWAT Kats' biggest and most loyal supporter. She has a radio communicator which enables her to contact the SWAT Kats directly when danger threatens the city. In spite of not knowing who they are underneath, Callie usually trusts her life to the SWAT Kats if required. In the episode "Bride of the Pastmaster," her ancestor Queen Callista is leader of the medieval kingdom of "Megalith City." In the episode "The Dark Side of the SWAT Kats," her equivalent in a parallel universe is an evil ally of Dark Kat.

Though Razor has a crush on her (more evident in the fact that even her medieval ancestor seems to favor Razor over T-Bone), Callie likewise seems to favor Jake and only sees Chance as a friend.

Callie's prime mode of transportation is a green sedan. 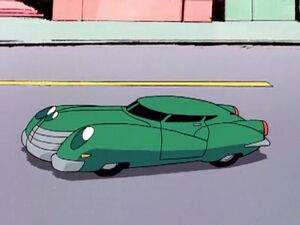 Retrieved from "https://hero.fandom.com/wiki/Callie_Briggs?oldid=2020821"
Community content is available under CC-BY-SA unless otherwise noted.