bring Azymondias home to his mother

Callum is the stepson of King Harrow of Katolis, and one of the heroes of the 2018 animated Netflix series The Dragon Prince.

He was voiced by Jack DeSena, who also voices as Sokka from Avatar: The Last Airbender.

Callum is the son of queen Sarai, and an unknown father, and the older half-brother of Ezran. After Sarai married king Harrow, he was the crowned prince and adopted into the royal family. It should be noted, however, that his younger brother Ezran comes before him in the line of succession as the Crown Prince of Katolis.

Sol Regem:  Rayla tells Callum about Sol Regem's misanthropy and how he was blinded during his reign not long before the wars between Xadia and Humanity began. They attempt to sneak past the blind Sun Dragon, but he notices them after Zym unintentionally gives away their location. Rayla then attempts to negotiate with the Sun Dragon, but Regem is unreasonable, especially after finding out that Callum had used Dark Magic at one time. To be expanded

he expresses his hatred for Avizandum, he comments on anger but isn't sure how to feel as he could be happy that his mother's death

was avenged or feel sorry for Zym, who lost his father, so Rayla reassures him that they break the cycle of hatred between their two nations. 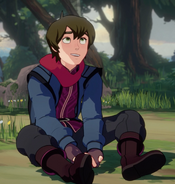 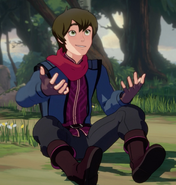 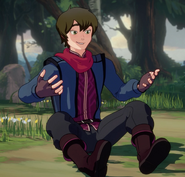 Add a photo to this gallery
Retrieved from "https://hero.fandom.com/wiki/Callum_(The_Dragon_Prince)?oldid=1811248"
Community content is available under CC-BY-SA unless otherwise noted.