Cambot was one of the four robots characters on the Mystery Science Theater 3000 television series.

He would broadcast the host sequences on the Satellite of Love to viewers at home as well as the Mads. During host segements if musical accompaniment was desired Cambot would go to the wall of keyboards and play whatever music was required by the others. When the experiments were shown Cambot would go through a series of doors into the movie theater where he would film Joel, Mike Nelson, or Jonah Heston, as well as Tom Servo, and Crow T. Robot watching the various films that the Mads sent to them.

After the SOL returned to Earth Cambot moved into an apartment with Mike, Servo, and Crow as they prepared to watch The Crawling Eye for the first time in many years.

Along with the other bots, Cambot was captured by Kinga Forrester. After further changes to his body he was placed on board the rebuilt SOL. He appears in the robot roll call sequence when new test case Jonah Heston holds up a mirror.

Cambot on the KTMA version of MST3K

Cambot as he appeared on the first season of the series. 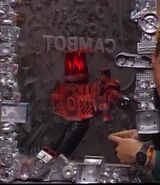 Cambot as he appeared on the 2nd through the first part of the 5th season of the series.

Cambot as he appeared in the second part of the 5th through 7th seasons of the series.

Cambot as he appeared in the 8th to 10th seasons of the series. 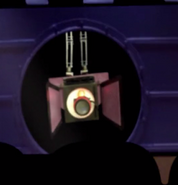 Cambot as he appeared in season 11.
Add a photo to this gallery
Retrieved from "https://hero.fandom.com/wiki/Cambot?oldid=1239818"
Community content is available under CC-BY-SA unless otherwise noted.