Captain of the Efrafan Warren

Being with Blackberry (TV Series)

Campion is a rabbit who the captain of the Efrafan Owsla and a major character in the Watership Down series.

In the Movie, Campion is Woundwort's completely devoted right-hand man. Although he is often threatening to any other rabbit not staying in his place, Campion fled like a coward when he saw the dog arrived.

In the TV series, Campion is probably the most conflicted character. On one hand he has a strong sense of loyalty to General Woundwort. On the other he knows that Woundwort is a brutal tyrant. Campion is grateful to Hazel for helping him to recover from a hawk attack and becomes a double agent for Watership Down. However, he is very lonely and although he knows that he is doing the right thing, he still feels guilty for betraying Woundwort who both trusts and respects him. Campion's guilt results in self-loathing, and perhaps even suicidal tendencies as he throws himself under a boulder to protect Woundwort, the very rabbit he is trying to dethrone.

Even whilst acting as a spy for the Watership Down rabbits, Campion still maintains an astonishing amount of loyalty to Woundwort and saves him from the shining wire, before being arrested by Vervain immediately afterwards, and very nearly gets himself killed in order to protect him from a falling boulder. Campion's remarkable sense of loyalty is also shown by the fact that, although he hates Vervain for being a coward and a bully, he still prevents General Woundwort from executing him for cowardice by lying to his chief and telling him that he had sent Vervain on ahead. Ironically, Campion is a very good liar despite also being a very loyal and honourable character. Hawkbit states that he is also too crafty to get caught by Woundwort.

Campion is very brave and willing to risk the wrath of Woundwort in order to act as a double agent for the Watership Down rabbits. His courage is also shown by his willingness to sacrifice his life for Woundwort, despite the fact that he has been working for Watership Down. In addition to his immense courage and loyalty, Campion is, with the possible exception of Moss, by far the most compassionate of the Efrafan Owsla and constantly tries to make Efrafa a better place. Essentially Campion is the polar opposite of Vervain, despite being a fellow Efrafan officer.

Campion has a soft spot for Primrose, having often stood up for her in Efrafa. However, if he did have any romantic feelings for her, they are quickly thrown aside when he meets and falls in love with Blackberry and at the end of the series they settle down on Watership Down together. Campion's noble heart even allows him to gain the respect of the Black Rabbit of Inle, who tells him he has an important part to play in the destruction of Woundwort.

Campion is a highly resilient warrior, as shown when he survives an attack from a hawk, something Dandelion notes that not many rabbits can survive. The most notable example of his remarkable resilience is shown when he survives being crushed by a boulder, though he loses his right eye and ear in the process. Campion is also a formidable fighter, being able to defeat the previous leader of Darkhaven, Granite, several times in single combat. He is one of the very few who manages to hold his ground against the deadly General Woundwort, temporarily fending him off in order to protect Bigwig and Hazel. However, he knows that he is not strong enough to defeat Woundwort and surprises him by fleeing rather than accepting his challenge for control of Darkhaven. Whilst some would consider this to be cowardly, Woundwort simply states that Campion was "never a fool".

In the Miniseries, Campion is not as sadistic and cruel as his Owsla comrades but he remains devoted to his tyrannical warren, simply following orders on the pretext that this is what all good soldiers do, a point of view that changes after meeting Holly who advises him to act like a good rabbit rather than a good soldier. He is also quite rational, not finding that storytellers should be trained in combat unless of course the individual has the right physique or that Sainfon does not have to boast so unnecessarily about his talents as a trainer when he does hasn't shown anything yet. When Bigwig arrives at Efrafa, Campion is quickly suspicious of him although he notes that the newcomer would make a perfect member of the Owsla with the right training.

After the escape of the female rabbits from Efrafa with the rabbits from Watership Down, Campion sees no point in pursuing them since they never intended to harm them, especially since Campion came to respect Holly, which puts him in conflict with Orchis. Unlike his other incarnations, Campion appears to follow Woundwort more out of fear than loyalty, following his leader in his selfish revenge plans against Watership Down. During the invasion of the hill, Campion viewed Hazel's peace proposal favorably and was more favorable to taking prisoners than slaughtering, two things Woundwort rejected while threatening Campion for his life if he contradicted his orders again. After witnessing the murder of Holly which he did not want, Campion became saddened by his death and this is what ultimately gave him the courage to stand up to Woundwort and to defy his orders, repeating Holly's words.

Campion is the captain of the Efrafan Owsla. He is a brave and skillful officer respected by General Woundwort. He is well liked by both Hazel and Bigwig despite being their enemy for a while. Campion takes over the warren of Efrafa after Woundwort's disappearance, and agrees that Efrafa and Watership Down can co-exist in peace. In the film adaption, Campion's role drastically decreases, to the point of becoming a background character with only a few lines.

He is the rabbit who gives Bigwig his identification mark. He is later ordered by Woundwort to follow Bigwig and to not let him out of his sight. He later tells Woundwort that Bigwig wounded Chervil and took a crowd of the mark with him.

During the battle the Efrafans have against the rabbits of Watership Down, Campion tells the other Efrafans to run for their lives when he spotted the dog coming to Watership Down. His fate is ultimately left open ended at the end of the film.

Captain Campion plays a much bigger role in the Watership Down TV series than he did in his previous appearences. However, his personality isn't the same as it was in previous adaptations.

In the animated series, Campion sees that Woundwort's leadership is destroying Efrafa, but is torn between his longing for the free ways of Watership Down and his loyalty to his chief rabbit. In the end, Campion turns against Woundwort to save his friend's warren, yet sacrifices himself to save Woundwort from a falling rock. Surviving miraculously but with terrible scars and losing an ear, Campion is touched by the Black Rabbit of Inlé and is tasked with stopping Woundwort. Feeling empty and half-dead, Campion's will to live is returned thanks to the love of Blackberry. He finally settles with her on Watership Down, not only because of his love for her, but because he also had no other place to go after Efrafa was destroyed.

Campion appears in the miniseries, and is voiced by Lee Ingleby. He is once again shown to be reluctant in his actions committed under Woundwort's orders. This is first shown during the marking of the Efrafan does, when he closes his eyes during Nettle's marking. This causes Captain Holly, who is present at the event, to chide him for looking away, pointing out that Campion is party to the torture and should own up to his role in it. Though Campion defends himself by stating that he is merely following orders like all soldiers are supposed to do, Holly advises Campion that what makes a good soldier isn’t always what makes a good rabbit.

Later on, as the conflict between Watership Down and Efrafa escalates, Campion shows sympathy and respect for Hazel’s group of rabbits, admitting to liking Holly despite being his enemy. Before the Battle of Watership Down, Campion shows interest in Hazel’s proposal for peace and begins to doubt Woundwort upon realizing that the latter is more interested in destroying the "enemy" warren instead of what is best for Efrafa itself. His conflicting feelings increase after witnessing Holly’s murder at the paws of his troops, showing guilt and remorse as a heartbroken Hyzenthlay is dragged back into the warren.

In the end, Campion defies Woundwort by refusing to go into Hazel's warren with him and kill the rabbits inside, saying what Holly said to him. Enraged, Woundwort orders Captain Orchis to kill Campion before going into the warren with Sainfoin instead. Orchis attempts to seize control of Campion’s forces to join his battalion, but the troops answer only to Campion’s order dismissing them. Orchis tries to intimidate the deserting rabbits by saying that they will be hunted down, but Campion defies Orchis, pointing out how though they may be equals in rank, Campion is the better fighter between the two, strongly threatening Orchis to back away from him before departing with his rabbits to Efrafa. He is not seen again.

"Run! Run for your lives! Run!"
Add a photo to this gallery 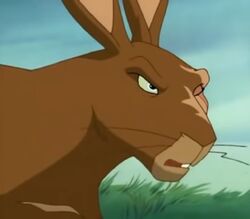 Campion after his accident.
Add a photo to this gallery

Campion with Bigwig and Sainfoin.

"My rank equal you may be, Orchis, but my equal in combat, you are not! I strongly advise you to step away from me."
Add a photo to this gallery

Retrieved from "https://hero.fandom.com/wiki/Campion?oldid=2171272"
Community content is available under CC-BY-SA unless otherwise noted.