Candace Stone is the main antagonist of the second season of the Netflix show You and a major character in the first season. She is the ex girlfriend of the protagonist Joe Goldberg.

She was portrayed by Ambyr Childers.

In season one not much was known about Candace. She was revealed to be Joe's girlfriend before the show began who cheated on him for a man named Elijah Thornton. Upon finding this out Joe insisted to Candace that she did love him and she insisted she did not. Candace tore apart a book Joe gave her as a gift.

At the end of season one Candace comes into Joe's bookstore and asks to talk with him. Joe seems to be surprised that she is alive.

In season two it is revealed that after Candace tore apart Joe's book and dumped him he kidnapped her and took her to the woods. He attempted to murder her and left her for dead. She went to the police station to report the attempted murder but the officer stated that the force would only consider it domestic violence. The officer then advised Candace to try and prevent Joe finding out she was still alive.

Candace talks with Joe at a restaurant and confronts him about the fact that Joe's newer ex Guinevere Beck was murdered and her therapist Dr Nicky has been arrested for her murder. Candace reveals that she knows Joe murdered her and framed Dr Nicky. She vows to make Joe see himself as he really is rather than the hero he delusionally thinks he is.

Candace dates the brother of Love Quinn, Forty upon finding out that Love is dating Joe. She works to protect Love and Forty from Joe. She gives Forty a book which Joe wrote and published pretending to be Beck so that everyone would think Dr Nicky killed her. She advises Forty to make a film adaptation of the book and Forty agrees.

Candace sneaks into Joe and Love's apartment only to be caught by the latter who is inside. Love confronts her under the impression she intends to take advantage of her family's wealth and came to the apartment to steal. Love reveals that the name Joe has been using since has has known Love is false and his real name is in fact Joe Goldberg. Love pays Candace to leave her and Joe alone.

Candace visits Forty who confronts her about her alias and apparent obsession with Joe. Despite her warnings about Joe's real nature Forty dismisses her. Candace warns him that Joe will probably kill Love and then leaves.

Candace catches Joe in a cage he owns with the corpse of a woman named Delilah. She locks him in the cage and calls Love to see him with the corpse and show her who he really is. When Love sees she storms off seemingly upset and crying. Candace follows her to console her but Love quickly slits Candace's throat, killing her. 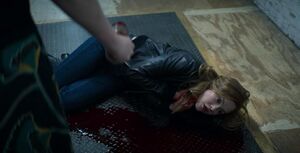 Candace's death.
Add a photo to this gallery

Retrieved from "https://hero.fandom.com/wiki/Candace_Stone?oldid=1732776"
Community content is available under CC-BY-SA unless otherwise noted.