Leader of the Mandalorians

Unite the Mandalorian clans under his banner.

Canderous was a Mandalorian of the Ordo clan who fought the Republic in the Mandalorian Wars under Mandalore the Preserver. He was a great warrior, handling himself well in battle, even under the stress of being in command of the only division between victory and defeat. He fought Revan and Malak in the war before being defeated and sinking to mercenary life, where he eventually found work with Davik Kang of the Exchange as an enforcer on Taris.

Taris was where Revan found Canderous, who offered to work together and get themselves off the planet. Canderous proposed a plan to get the Sith launch codes that allowed ships to leave the planet and steal the Ebon Hawk, Davik's flagship, and the fastest ship in the Outer Rim. After pulling that off, Canderous followed Revan around the galaxy, as his former enemy once again searched for the Star Forge.

Canderous re-appears in Star Wars: Knights of the Old Republic II: The Sith Lords as the leader of the Mandalorians as Mandalore. He acquired this position after Revan helped him to locate the Helmet of Mandalore. 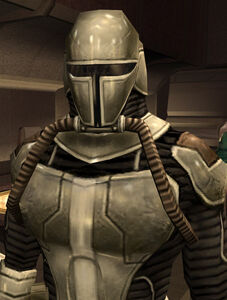 The Mandalore the Preserver
Add a photo to this gallery

Retrieved from "https://hero.fandom.com/wiki/Canderous_Ordo?oldid=1948250"
Community content is available under CC-BY-SA unless otherwise noted.