Candi Stryper is one of the playable heroes exclusively seen only in the two extra levels featured in The House of the Dead: Overkill Extended Cut for PlayStation 3. She is a young stripper and former lover of Varla Guns' younger brother Jasper. After finding out the death of Jasper, Candi joins Varla to seek revenge against Papa Caesar and together, they fight off the mutants and seek Papa Caesar to avenge the death of Jasper.

She was voiced by Kori Rushton.

Candi was the lover of Dr. Jasper Guns and co-worker of Varla Guns at the Pink Pussycat strip club. After Varla informs her of Jasper's death, Candi accompanies her through Bayou City in search of her motorcycle. Fighting their way to the biker bar on the other side of town, they face a pair of mutated strippers whom they once worked with known as Coco and Sindy. Once Varla retrieves her keys from Sindy's gut, she drives Candi a safe distance from town to allow her to escape, before driving off to find G and Washington at the hospital.

Later, after abandoning the heroes at the carnival, Varla encounters Candi again, attempting to hitchhike back into town to retrieve Jasper's voice box which she left at the club by mistake. Once again, Varla attempts to get Candi away from the outbreak, but when the pair discover Papa Caesar at a meat processing factory they divert their attention to taking him down. In the end they face off with Meat Katie, a female mutant dressed like a minotaur with a giant meat cleaver. They defeat her by knocking her back into a grinder, at the same time her cleaver is thrown into the air and lands across two supports. Unfortunately, they do not hold it in place for long and it falls, cutting Candi's arm clean off. She dies of bloodloss in Varla's arms, seeing visions of Jasper coming down from Heaven on a stair lift to greet her.

Candi is seen with a leg-brace on her right leg, which possibly came from a leg injury prior to the game's time frame. She is also shown to be very unintelligent, a typical dumb blonde character. 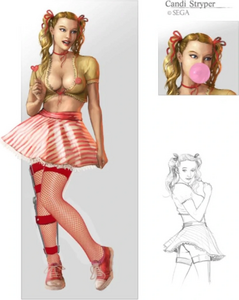 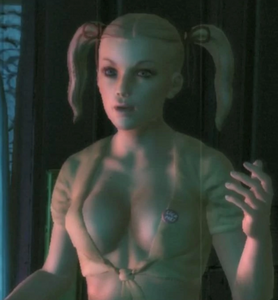 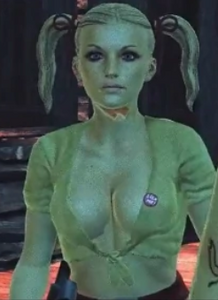 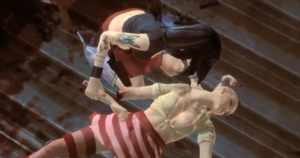 Candi dies from blood loss after her arm's amputation. 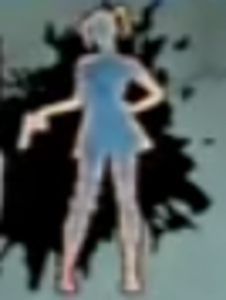 This article contains content derived from the "Candi Stryper" article on the Wiki of the Dead, licensed under CC-BY-SA.