Candice Arme is a character from Phoenix Wright: Ace Attorney - Dual Destinies, who was the victim in the episode "Turnabout Countdown". Candice was a detective who specialized in bombing incidents.

Ahead of a poignant launch at the Cosmos Space Center, the director received a bomb threat that stated that a bombing would occur during the launch. Due to it's connection to a similar incident from the past, there was no doubt that it was genuine, but due to a politically charged cover up the American government forced the go-ahead of the launch anyway, with official reason given that America should "never give into terrorists". Due to the threat, security was incredibly tight during the launch and Candice Arme was one of the bombing specalized called for security detail. As was "promised", several bombs were detonated at the time of the launch. Candice rushed to the space center's lounge, where she encountered a figure who she thought was the bomber; actually the space center director. Candice began shooting him, but miraculously the bullets ricocheted off the medal attached to the director's chest. The director was able to convince Candice that the person she had shot was a third figure who had slipped out thereafter. After wards, Candice located an third bomb which had not detonated. A member of the bomb squad, Ted Tonate, disarmed the bomb.

During the trial of Solomon Starbuck Candice was transporting the disarmed bomb to the courthouse alongside Tonate. However, Tonate made money by stealing bombs that he disarmed during his work and selling them over the black market, and he went to steal the bomb this time too. Unfortunately, Candice's attempt to do the good thing and confront Tonate over this resulted in the latter bludgeoning her to death. In the middle of the trial that followed, a terrorist committed a bombing incident -- after the bombing occurred, Tonate took advantage by placing Arme's body at the bombing scene, making it look like she been killed as a result of the explosion.

The truth behind Candice's actions and her death were uncovered by Phoenix Wright. 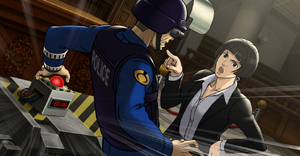 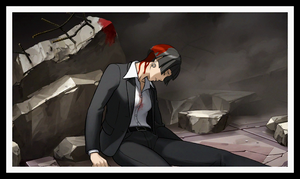 Candice's corpse discovered at the bombing scene
Add a photo to this gallery
Retrieved from "https://hero.fandom.com/wiki/Candice_Arme?oldid=1755322"
Community content is available under CC-BY-SA unless otherwise noted.