Candy is one of the main protagonists of the Fighting Vipers video game series. She is a young woman who jump into the battle to help Bahn and her friends.

Candy is a rather attractive woman, She has a black hair in twintails, She wears a red and black suit, Red boots, and and white gloves, or using a black bikini. and red hairband

During a event around the slums of Japan, a classified project called VIPERS, recruited fighters to see who they saw fit against the grandmaster, Candy was one the first recruited alongside Bahn and Sanman.

During the events of the final battle, she alongside Bahn defeated the grandmaster and released the underground fighters. At the end, Bahn said that everyone was greater champion oin their own right.

In months later, a new battle ensuing, but this time it was a tournament, Candy jumped to the call and agreed to battle as far anybody will be safe, At the end she seen alongside the winner of the tournament.

Candy is a sweet and kind girl, She is shy, empathetic, selfless, and welcoming towards anybody, but she loves to get in friendly battles with saman and Bahn, She also has formed a friendship with Grace. 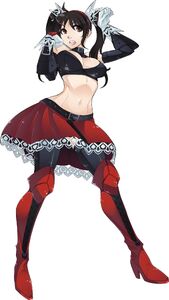 Retrieved from "https://hero.fandom.com/wiki/Candy_(Fighting_Vipers)?oldid=1970603"
Community content is available under CC-BY-SA unless otherwise noted.