Canopy is an minor tragic-heroic protagonist in Transformers: The Last Knight.

Canopy appears to share the same body-type as Long Haul, but with a yellow color scheme and a different head. He also utilized a dome of trash in order to disguise himself as a pile of rubble.

He appears to be a protective guardian to Izabella and Sqweeks, having been raising them both since the former's parents were murdered by Decepticons years ago.

Canopy was hiding out in the ruins of Chicago with his companions Izabella and Sqweeks. When Izabella returned with a group of trespassing human children who were being chased by the Transformers Reaction Force. Canopy helped shelter them, but as he broke cover the TRF caught sight of him, only reluctant to attack at first due to his proximity to the children and being unable to verify his faction. After he had moved away from the children and urged them to follow him to safety, the TRF saw their chance and attacked. A missile from one of their jets struck him in the chest and he collapsed, mortally wounded. Canopy implored Izabella to run and thanked her for her companionship before dying. Izabella was still reluctant to abandon him and was almost caught by TRF forces but was saved by Cade Yeager when he asked her if Canopy would want her to die as well. 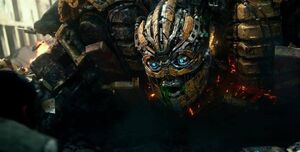