Leader of the Squidbeak Splatoon

Fighting skills (when he was younger)

Have the Great Zapfish return (Splatoon)

Return back onto the surface (Splatoon 2: Octo Expansion)

Agent 3
Agent 8
Off the Hook

Captain Craig Cuttlefish, also known as Cap'n Cuttlefish, is an elderly Inkling and serves as the deuteragonist of Splatoon, and one of the two unseen overarching protagonists (alongside Agent 3) of its sequel Splatoon 2 (though only presented as a major protagonist in the DLC pack Octo Expansion in the latter), though is mentioned by both Callie and Marie, his granddaughters, in Octo Canyon countless times.

Cap'n Cuttlefish has brown eyes, the Cap of Legend, denim shorts and wears a robe that has medals, as he was the leader of the Squidbeak Splatoon during the Great Turf Wars. He also has holes in his brown shoes that expose his toes.

Cap'n Cuttlefish was recognized as a hero during the Great Turf War. Now he watches over Octo Valley, watching for any suspicious behavior.

His favorite food is crab cakes (biscuits in the European version) as pointed out by Agents 1 and 2. He is often distracted by them, which prompted DJ Octavio to escape his snow globe prison.

Long before the first game's events, Cap'n Cuttlefish served as the leader of the Squidbeak Splatoon, where he helped the Inklings defend themselves from the Octarians. In the end, the Inklings won the Great Turf War and the Octarians resorted to hiding underground.

Two years after the first Splatoon, initially, he was only mentioned in a Sunken Scroll. Later, he made his full appearance as an NPC, where he assists Agent 8, along with Pearl and Marina to get back onto the surface.

In Splatoon 3, he has retired as head of the New Squidbeak Splatoon, handing command to Agent 3, the Inkling who helped him rescue the Great Zapfish in the first Splatoon. 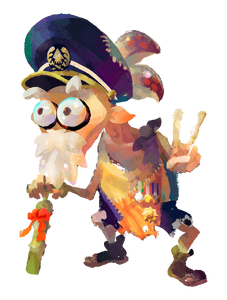 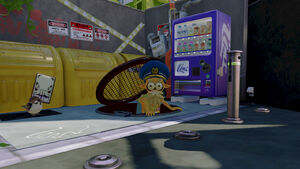 Cuttlefish watching the player from a manhole 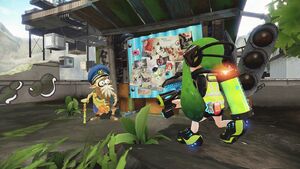 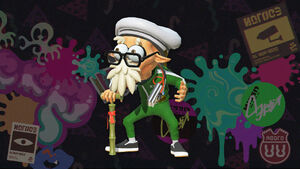 Cap'n Cuttlefish as he appears in Splatoon 2: Octo Expansion
Community content is available under CC-BY-SA unless otherwise noted.
Advertisement