Heroes Wiki
Register
Don't have an account?
Sign In
Advertisement
in: My Little Pony Heroes, Male, Cartoon Heroes,
and 31 more

Get rich and make use of his life after it was torn (formerly).

To help the Mane Six defeat the Storm King to get avenge his city destruction (all succeeded).

Capper is one of the major protagonists in My Little Pony: the Movie. He is a cat and was a con artist originally from Abyssinia. He was the first known victim of the Storm King's attack.

He is voiced by film and Broadway star Taye Diggs.

Capper, a smooth-talking (and singing) con-artist, was once a swanky aristocrat living the high-life with pride and dignity. That is, until Storm King came into power. A deal gone wrong turned Cappers threads on fleek into colorless rags, leaving Capper penniless and in a lifelong debt with the Storm King. To make ends meet, he relies on his wit and charm, distracting unsuspecting victims from his quick hands and swift tail. Cappers crimes aren't driven by malice. At his core, he feels a deep insecurity at his fall from grace, and believes his appearance dictates his status.

Capper first appears curiously noticing the Mane Six when they enter Klugetown. When the ponies attract too much attention from the Klugetowners, Capper scares them off by claiming the ponies are infected with the fictional disease "pastelus coloritis." He then offers to serve as the ponies' guide and protector through Klugetown on their way to find the "Queen of the Hippos", but he secretly makes plans to sell the ponies to crime boss Verko in order to settle his debt.

Capper charms Twilight Sparkle's friends, and Rarity surprises him with a generous gesture (Mending his frayed and damaged jacket) as thanks for helping them. This causes Capper to feel remorseful for his deception and have a change of heart. Twilight learns that the "Hippos" they seek are actually the Hippogriffs and that Capper was less than truthful with them. Before Capper can escort the ponies to the Hippogriffs' location, Verko appears, exposing Capper's true dishonest intentions. After the Mane Six escape from Tempest Shadow on a departing airship, Tempest takes Capper prisoner and demands to know where they're going, Capper, remembering Rarity's earlier generosity, points Tempest toward Black Skull Island in the opposite direction.

When Capper's deception is later revealed, Tempest punishes him - as well as Captain Celaeno and her pirate crew for harboring the Mane Six in secret - by destroying their airship and stranding them on the Basalt Beach.

Later, after Twilight was abandoned by her friends for screwing up their chances with the Hippogriffs and yelling at Pinkie Pie, and is captured by Tempest and taken back to Canterlot, Capper appears before Twilight's friends as they were all starting to feel guilty for leaving Twilight and they're starting to believe they finally lost and he offers to help them to save her, even though Rarity and other still hold a big grudge against him for lying to them and trying sell them out, but he managed to earn their forgiveness by telling them how far they made it from fighting against Strom King and Tempest's army and got along with Captain Celaeno's crew too to help them after Rainbow Dash convinced them to help earlier and Princess Skystar disobeyed her mother and fallowed the Mane 6 back up because she understood they really needed help. In order to sneak into the city, Capper poses as a chef delivering a congratulatory cake to the Storm King that the pirates and Skystar hide inside, and the rest of the Mane Six pose as Capper's prisoners. Though they successfully infiltrate the heavily guarded city, their facade is soon exposed, and they are forced to fight their way past the Storm King's forces. At one point, Capper uses Spike as a flamethrower to fend off the Storm Guards.

When the Storm King creates a twister to rip the city apart, Capper helps Twilight's friends break through with Pinkie Pie's party cannon. After the Storm King is defeated, Capper joins his new friends in celebrating at the Friendship Festival, and Rarity presents him with a new cape and top hat.

Between Dark and Dawn

Capper helps Pinkie Pie and Big McIntosh obtain one of the Andalusian stars in Klugetown. He later attempts to steal the gathered stars from the villain Cosmos—who has possessed the bodies of Twilight, Celestia, and Luna—but is captured and transformed into a kitten by her along with Pinkie, Applejack, and the Cutie Mark Crusaders. He is freed and reverted back to normal after Cosmos' defeat and awarded a medal for helping save Equestria.

In the "Season 10" comics, Capper travels to his homeland of Abyssinia with Fluttershy, Pinkie Pie, Trixie, and Discord.

The team arrives to the Abyssinian capital of Panthera, where Capper reveals his past as a street thief, working alongside Chummer and several others. When the team is arrested by police for bringing magic into the city, Capper tries to convince King Meowmeow to de-outlaw magic and fails, resulting in the group's imprisonment. They are soon liberated by Capper's old friends and taken to safety in the tunnels beneath the city, where Capper reunites with Chummer. Capper reconciles with Chummer, and the two groups work together to undermine King Meowmeow's regime. Along the way, they discover the Abyssinian Tree of Harmony and Elements of Harmony, with Capper becoming the Abyssinian element of generosity. Together with his old friends, Capper returns magic to Abyssinia, and King Meowmeow is deposed.

Capper is a conniving and opportunistic con artist, able to sway the main characters into accepting his help with his charismatic personality and quick-thinking, with the hidden intentions of selling them to settle his debt. However, Rarity's gesture of friendship proves enough for him to choose to throw Tempest Shadow off the ponies' trail, despite he himself being taken captive by Tempest. Capper's heroism and loyalty continues to show throught the rest of the film, encouraging the ponies to rescue Twilight Sparkle after she's captured by Tempest and joining them in the final battle against the Storm King's army.

Capper is an orange cat with dark blue over his head and his tail is wrapped violet tape, possibly because his tail was cut. He wears a red jacket which he got from a ship his former friend Chumer stole after he betrayed Capper. When he arrived as Canterlot with the ponies and the other creatures in the cake, he wore a chef's hat and bandanna. At the end of the movie, Rarity gives a black cape with blue lining over it and a hat to go with it.

Rarity gives to Capper a new cape and top hat as a presents. 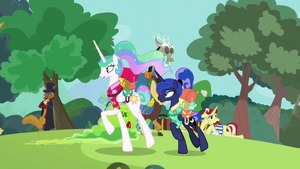 Capper makes a cameo in the song lotta little things 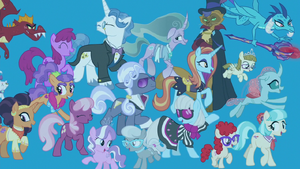 Capper appers in a group shot the magic friendship grows 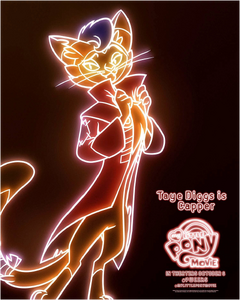 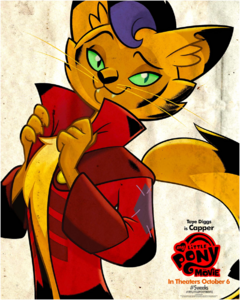 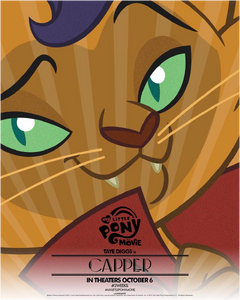 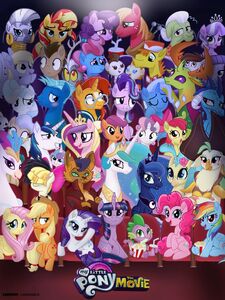 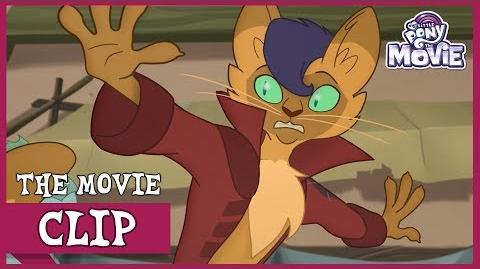 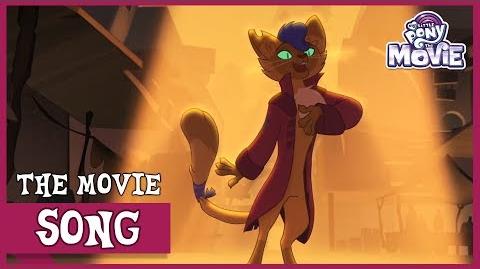 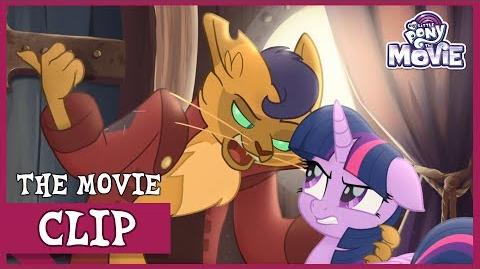 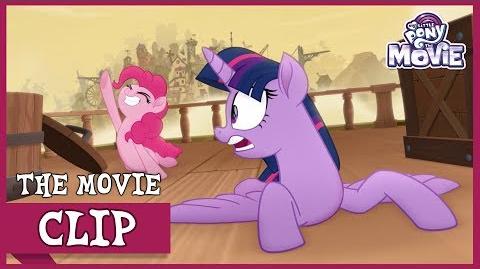 The Mane 6's Escape from Klugetown! My Little Pony The Movie Full HD 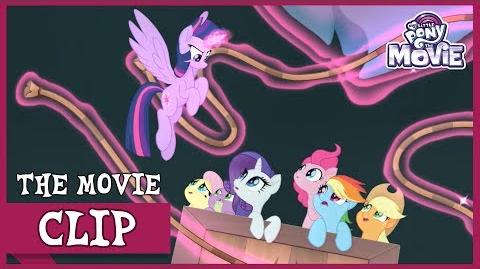 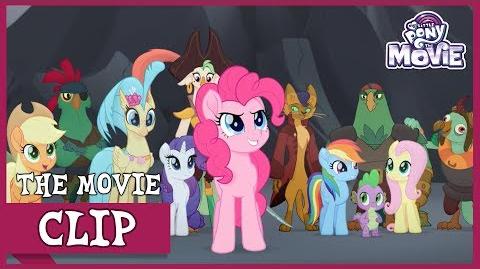 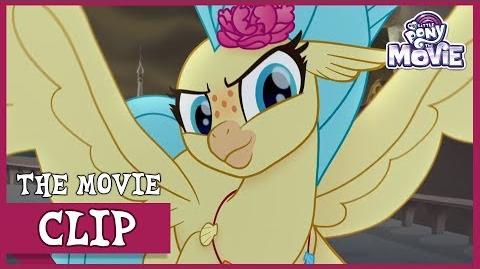 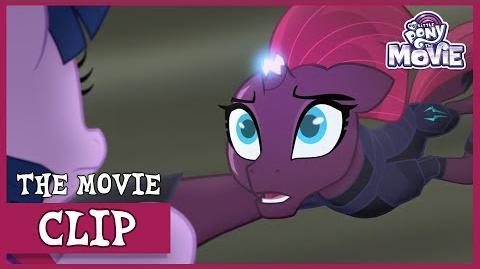 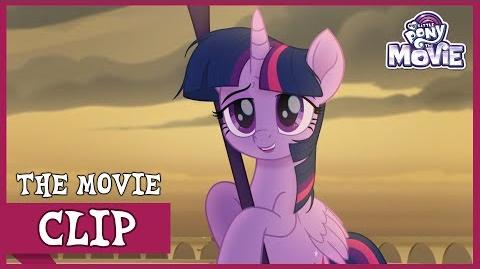 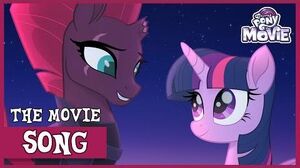 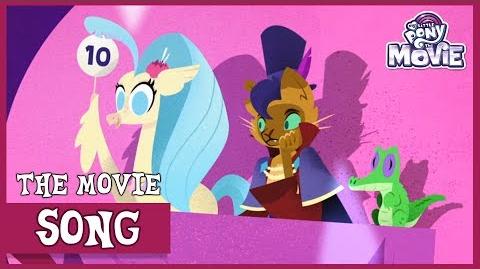