To go on adventures with his friends

Cappy is one of main characters in Hamtaro.

He is voiced by Ai Uchikawa in the Japanese Version and Ellen Kennedy also voices Brainy Barker in the English Version.

He is a white hamster with brown ears. He wears a green hat/cap. He has dark gray-blue eyes.

Cappy loves hats. The two hats he most commonly wears are his green swimming cap, and the giant red saucepan that he usually hides under. While he loves his home, he does not like being spoiled, and looks up to Boss due to Boss's independence as a field hamster. 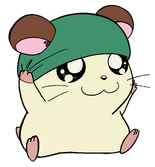 Retrieved from "https://hero.fandom.com/wiki/Cappy_(Hamtaro)?oldid=1665905"
Community content is available under CC-BY-SA unless otherwise noted.