Talking with Steve and his friends.

Kill Bad Captain and Tim for stealing his Tank (formerly).
Form an alliance between the Tankmen and the Henchmen while watching the movie Titanic (succeeded).
Kill the Thugmen in order to leave Steve alone (succeeded).
Kill Boyfriend and Girlfriend for entering his military zone (all failed).

Captain is a boastful, vulgar but courageous Tankman, as he has no qualms with charging at the enemy, even without their infamous tank.

Captain speaks with an American accent, and although he is the leader of the Tankmen, he is capable of being benevolent with his friends as his enemies, as he is willing to accept his enemies' friendship (or a minor truce), as shown with the Bad Captain and Tim when they each have a half of the Titanic DVD set.

Although he is the leader of the Tankmen, Captain has a black arum, with black gloves and boots, he has a white bulletproof vest, and he has two corporal insignias on both shoulders, making him the only Tankman to have these, possibly to show his rank. He has a helmet with a white visor, leaving his mouth visible.

While on a routine ride in the tank, Captain and Steve are stopped by a protester blocking their path. While Steve wants to run over the "nomadic do-gooder", Captain is hesitant, not wanting to live with the screams of agony in his mind. He offers the protester his own gun to commit suicide, but the man refuses, insulting the tank. Steve, now aggravated, insults the protester back, hurting his feelings; he apologizes afterwards and offers to "hook him up" with a female partner. Captain then asks for the stranger's name, to which he replies "Bill".

One year later, Captain and Steve congratulate each other on their achievement: helping Bill out of the wasteland and bringing him to the army, and even marrying to a wife and expecting a child.

Captain parachutes into the battlefield to recon with Steve, who compliments his new googles. Captain asks where Steve left the tank, to which he realizes it was probably stolen. Meanwhile, the Bad Captain and Tim find the tank in question, along with a DVD "disc 2" of Titanic; as so it happens, Steve has "disc 1". Rather than surrender, Captain makes an order to charge and attack. However, the opposing sides realize they each have a half of the Titanic DVD set, so they make a truce and watch the movie together, in exchange for the tank

Captain makes a cameo appearance, along with Steve, being seen through the sniper scope of Private Skittles.

At a local bar, Captain has a conversation with another of the Tankmen, who laments Bill's death, only to get a knife in their back as soon as he mentions that Bill was going to be a father. This was part of a major scuffle caused by Steve, who's miffed that Captain forgot his birthday again; however, Captain didn't forget, he just doesn't care. After being chased by Aussie anarchists, Steve offers a "solution" where one of the groups will fire a shot between two abandoned buildings; however, this is simply a distraction for Steve to kill one of the anarchists, and Captain kills the other with a shot from the tank, making it his birthday present for Steve.

To the NG Team, Tankman was a newcomer, never acknowledging his existence as he rides the big monochrome tank when they were nothing but concept sketches. In his story mode, Tankman is trying to stop Piconjo's soon-to-be reign over Newgrounds. In his first fight, Tankman trains in a virtual reality program against a hologram of Alloy.

He puts his training to an end when he discovers Samurai Asshole is on a rampage. After putting the chaos caused by S'asshole to an end, he continues his duty in protecting Newgrounds when a hostile Alien Hominid crashes in a nearby city and which is being protected by Salad Fingers. In the final part of the story, Tankman tracks down Piconjo, and hopes his execution will allow the masses of Newgrounds to follow his command.

In his ending, Tankman has total control of Newgrounds and redesigns it in his image, but he didn't take this new role lightly. He ordered a full redesign of the entire nation that would take a few of talented laborers months of work, and resulting in a widely criticized April Fools' joke.

After fighting many wars alongside his incompetent comrades, Captain forced himself to look for new grounds where he could do what he does best, eliminate enemies! Normally, he would be accompanied by his trusty tank, however he forgot where he parked it, leaving him pretty much naked and forcing him to get creative in the middle of action. His favorite movie is the first half of Titanic.

Despite being portrayed as a hero in TANKMEN and other media, Captain is portrayed as an antagonist in Week 7 of Friday Night Funkin'.

According to the story, because of Boyfriend and Girlfriend trespassed on military property, and he was planning to killing Boyfriend and Girlfriend, but was feeling bored that day so instead, he decided to have a rap battle with Boyfriend, after in which the first song "Ugh" ends, Captain would mock Boyfriend and Girlfriend, and after the second song "Guns", Captain gets vulgar and orders his solders to kill Girlfriend. However, Pico drops from the sky and kills two of his men; he will start firing at the Tankmen trying to stop him during the final song of the week, "Stress". 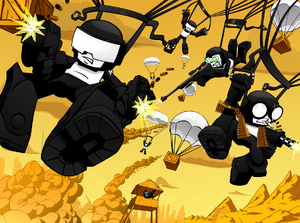 Captain defeats the Henchmens with Steve, Sniper and his soldiers. 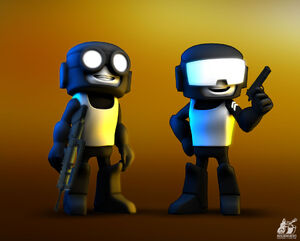 Captain with Steve in 3D. 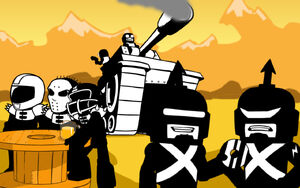 Captain with all characters from the original Tankmen franchise. 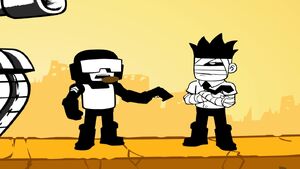 Captain lends his gun to Bill. 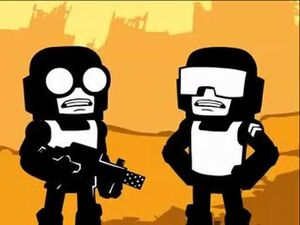 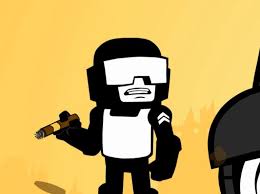 Captain with his cigar. 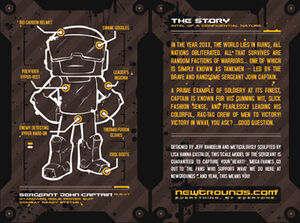 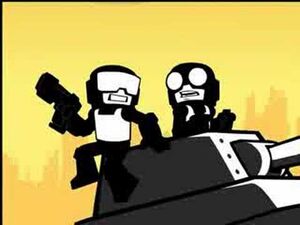 Steve with Captain on his tank. 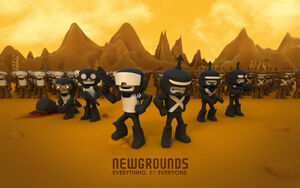 Captain with Steve, Sniper, Bill (now dead), Bad Captain, Tim, and Skittles in the 3D fanart of Tankmen franchise on the site Newgrounds.