Heroes Wiki
Register
Don't have an account?
Sign In
Advertisement
in: Female, In Love, Aliens,
and 32 more

Captain Amelia is the tritagonist and female lead in Disney's 43rd full-length animated feature film Treasure Planet, and unusually for such a major and attractive female role, her role is almost totally exempt from being anybody's romantic interest except in very small doses. She is portrayed far more as something of a heroine and a feminist. Captain Amelia is based on the character of Alexander Smollet, the captain from the original Treasure Island.

Captain Amelia is the experienced captain of the R.L.S. Legacy, the ship Dr. Delbert Doppler hired to journey to Treasure Planet. She is an alien who appears to be some sort of hybrid of cat and woman. She is attractive, inhumanly slim, with green, feline eyes, claws that protrude through her gloves, and exceedingly feline facial features.

Amelia is talkative, loquacious, quick-witted, magniloquent, fast-talking, intelligent, persuasive, eloquent, and a force of will. She is proud, pragmatic, intransigent, strong-minded, optimistic, trustworthy, businesslike, and scornful of flattery. Her speech is educated, courteous and to-the-point, oftentimes sarcastic but always with undeniable authority that quickly dominates the conversation with others. As such she caused discomfort to Dr. Doppler and Jim when they met for the first time. Amelia is also extremely vivacious and enthusiastic, as she fully takes advantage of her gender and is therefore incredibly powerful, energetic, aggressive, influential, and vigorous. She also possesses inhuman agility, a sleight of hand, and a British accent.

As a captain, she has a high demand of her crew, and is quick to appreciate talent though not as quick to sniff out fishy situations. According to Mr. Arrow the finest captain in "this or any other galaxy", she frequently demonstrates exceptional leadership and navigational skills, gaining admiration from honorable and adventurous subordinates such as Mr. Arrow, and fear from derogatory and disreputable crews, such as John Silver.

Despite their many differences, Amelia shares many similarities with Doppler. They are both intelligent, knowledgeable, determined, and remarkably brave when situation demands it. At first, she finds Dr. Doppler to be rather inconsiderate and opprobrious, as she criticized him for his carefree attitude and thoughtless discussion of treasure in front of a savage crew. But she doesn't seem to be troubled by his clumsiness and later befriends and eventually developed romantic feelings for him.

Captain Amelia is the experienced captain of the R.L.S. Legacy, the ship Dr. Delbert Doppler hired to journey to Treasure Planet.

Captain Amelia first appeared on the Legacy, surprising Doppler with an athletic entrance and the fact that she is a female captain - this was most likely done so that Treasure Planet would have a major female character. Upon meeting the Doctor she pointed fun at his spacesuit in a playful fashion, but soon returned to Captain's stance when he almost revealed the secret of the map. She soon took command of the volatile situation on the ship. In her stateroom, there is more banter between the two that is often taken as Amelia's introverted attempt at flirting, but more often is taken as her simply having fun making the bookish Delbert frustrated. Predominantly, she takes the map from Jim and locks up the Map in the ship's safe containing firearms stating the map will remain "under lock and key when not in use" and then pockets the key. She also refers to Jim that in the future he will address her as captain or ma'am as a sense of respect. For almost giving the secret of the map she tells Doppler to "zip his howling screamer" with all due respect and voicing her discontent with the crew that Doppler had hired.

She then orders Mr. Arrow to escort them both to the galley with also a insult by calling them both neophytes and then assigns Jim Hawkins as the cabin boy, and takes him to work for John Silver, the ship's cook, to keep him out of trouble. Amelia may (or may not) have had something of a crush on the first mate, Mr. Arrow , the rock like spacer - certainly it is clear she highly admired him. We then see Amelia again when she is up on the bridge with Mr. Arrow. She takes a deep breath and then smiles at Mr. Arrow, saying, "Well, my friend. Are we ready to raise this creaking tub?" rather amused. Mr. Arrow smiles back and follows orders before Amelia looks forward. Next scene, Amelia advises Delbert to "brace himself" before launch. He sarcastically imitates her before he is slammed into the wall due to not correctly following her directions, making his suit break. The next shot of Amelia is when she is observing Delbert marvel at some Orcus Galacticus from the bridge. When he takes out a camera to snap a picture of the impressive beasts, she raises her hand and starts to warn him, but is too late, as Delbert becomes coated in green whale goo (which may or may not be whale mucus). This causes Amelia to release a very unique chuckle before turning to the voice of Long John Silver, who begins flirting with the dispassionate feline who, at that moment, looked like she'd rather be swallowing lead. When Silver says, "and look at you. You're as trim and as bonny as a sloop with new sails and a fresh coat of paint." She quickly retorts with, "keep your flimflammery for your spaceport floozies, Silver." Morph mimicking a miniature version of Amelia, ending his flirting. When Silver tries to apologize, Amelia quickly draws his attention to Jim Hawkins, Silver's cabin boy who is "aimlessly footling about" in the shrouds.

During an encounter with a star having gone supernova, Amelia showed herself strong as well as agile, able to handle the wheel even as the star devolved into a black hole. She begins shouting out orders to the crew and soon, demonstrating her amazing strength, takes over the steering of the Legacy when Turnbuckle is thrown from the wheel. She then orders Jim Hawkins to "secure the lifelines good and tight". She faces the Supernova with great courage and keeps collected and clear headed. With the help of Dr. Delbert Doppler, she figures that, in order to survive the supernova, they need to ride one of the waves out of the black hole, which causes her to give the order that the sails be lowered (so they may charge the engines enough to blast them out of the black hole). This is done, and they escape the Supernova presumably unscathed. Her exemplary leadership as well as navigational skills allowed the Legacy to escape the black hole with minimum damage. She praised Doppler, whom she had previously thought to be stupid and incapable, for his astronomical advice that saved the ship from the black hole. After this, the crew cheers Amelia, who walks and checks things out with her sextant as Delbert expresses how amazing he thought her navigating, which she interrupts with, "Oh, tish-tosh. Actually, Doctor, your astronomical advice was most helpful." Which is the first time we see Amelia stating something truly good about Delbert, besides an earlier statement of "brilliant" when he finds the waves of the Supernova are not erratic. Amelia is next seen walking down the steps to the lower deck and calling out for Mr. Arrow. However, Arrow had fallen overboard and into the black hole, and when Amelia heard the news of Arrow's death. Scroop, handing her Mr. Arrow's hat while looking at Jim and saying, "His lifeline was not secured." Jim tries hopelessly to prove that Scroop is lying, but Mr. Arrow's lifeline is found to be gone. She quietly (but clearly) blamed Jim Hawkins for it, because she had assigned him to secure everyone's lifelines. Swallowing, Amelia faces the group and gives the following speech in an emotionally filled voice: "Mr. Arrow was a fine spacer. Finer than most of us could ever hope to be. But he knew the risks, as do we all. Resume your posts, we carry on." However, Amelia didn't see that it was really the treacherous spider-like menace known as Scroop.

After Arrow's death, Amelia feared that with him gone, something bad was going to happen, and her fear did come true. Mutiny erupted, the other space pirates attacked, and she barely escaped alive along with Jim Hawkins and Dr. Doppler. During their escape, one of Silver's pirates (against Silver's will for the safety of the map) almost blasted the ship, hitting the sail. Amelia was caught in the blast wave, and her injury was worsened by the crash landing. Though she attempted to maintain her dignity and conceal the seriousness of her injuries, it only worsened her state and further impaired her ability to move and lead. Jim and Doppler found her shelter in the home of B.E.N. the robot.

The captain and the doctor began to develop feelings for each other after they fought together against the mutineers. She flirted with Doppler, encouraging him to "say something else" other than concerns about her injuries. Afterwards the captain's injury deteriorated, and in a state of semiconsciousness, Amelia told Doppler that he had "wonderful eyes", though the doctor believed she had simply "lost her mind" due to the pain. Dr. Doppler distressed over Amelia's weakened state, lamenting that he was 'not that kind of doctor' and useless. Fortunately Amelia slowly regained her strength.

When Jim went to search for the map back on the ship, Amelia and Doppler were captured and held hostage by Silver and his monster gang, later, when left behind with a single guard while Silver and Jim searched for the map, the doctor once again lamented his uselessness, but Amelia comforted him, saying that he had been definitely useful on the trip. Doppler parenthetically discovered that the pirates had not bound his hands properly, and tricked the guard into seizing his pistol. The pair managed to capture the surviving pirates as well. When Silver boards the ship and flirts with with her again, she snaps at him saying, "Save your claptrap for the judge, Silver!"

Unable to control the ship with her injury, Doppler was forced to steer the ship while Amelia instructed him on what to do (on one occasion hitting the side of the ship) but after she irritated Doppler with directions he yelled at her and she was quiet immediately, most likely amazed that someone would yell at her like that.

With Jim's quick thinking, the cast were able to make it back to the space port, upon which Captain Amelia and Dr. Doppler shared an intimate hug, realizing what they did they split apart, though they shared a knowing look. Amelia admired Jim's bravery and told him that she would happily give him a reference to the Navy.

After the adventure on Treasure Planet was over, she is surprisingly married and started a family with Dr. Doppler. She is now a wife and a mother and has three babies looking like her, and one son looking like Doppler, despite them being clearly from different species. She is shown pulling back the blanket covering the boy's head, smiling, and then kissing his cheek. Amelia's last scene is when she and Delbert are shown romantically dancing before the end credits. 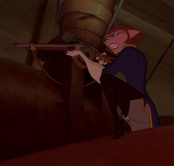 Captain Amelia captured by John Silver and his thugs

Amelia smiling warmly as she cradles her infant son

Amelia with Jim and Doppler

Amelia under the ship?