Captain America, aka Steve Rogers, is the main character of the Ultimate Universe comic books of Marvel. He is a lot different from his mainstream counterpart.

Unlike the Earth-616 version, Ultimate Cap is often seen using firearms and is completely willing to kill his opponents. Furthermore, he possesses more of a "All-American" attitude and does not even have careful thoughts about the way he and his government tell him to do. He also possesses an anti-French sentiment, presumably because during World War II the people of that era, including Rogers, saw the French as being weak and utter defeatists after Nazi Germany quickly conquered France. Furthermore, Captain America's anti-French sentiment was uttered in his infamous liner: "Surrender? You think this letter on my head stands for France?" when fighting against Herr Kleiser. This is opposite of his Earth 616 counterpart, who had respect for the French.

Super Soldier Serum: Steve was given the Super-soldier Serum, then combine with months of surgery and steroid injection, which grants him superhuman levels of physical capabilities, he possesses this following power:

Captain America's Uniform: The uniform is both water and fire retardant, it is made of Kevlar, Nomex, light weight titanium, and a chest plate Vibranium. The costume also offers a high level of resistance to electric shocks and force impacts, such as falls from thousands of meters in height. The suit cannot be pierced by normal conventional sharp-edged materials like sharpened wood, glass, iron, copper, or aluminum. The suit also gives resistance to high temperatures. It includes a voice-operated, wireless communicator for the left ear, which has its frequencies blocked, making it highly difficult to trace. 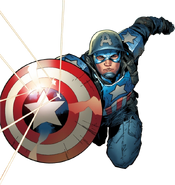 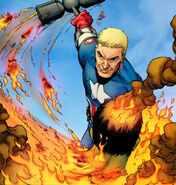 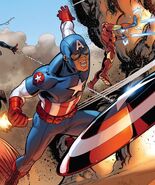 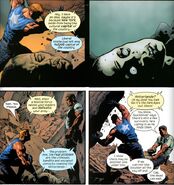 Add a photo to this gallery
Retrieved from "https://hero.fandom.com/wiki/Captain_America_(Ultimate_Marvel)?oldid=2015934"
Community content is available under CC-BY-SA unless otherwise noted.