Captain Britain is the defender of Britain in the Marvel Universe and is in many ways the British equivalent of Captain America, however the two characters are very different in origins and ultimate place in the world - with Captain Britain being only one of many such defenders of Britain chosen via a mystical intervention of sorts by Merlyn and his daughter Roma.

Captain Britain is devoted to upholding the laws and customs of Britain and defends it against all threats, at first he fought villains of an earthly nature but as the series progressed he would start to fight much more powerful otherworldly threats such as Jim Jaspers and

Brian Braddock is the first Captain Britain. He is a studious British youth from aristocratic Braddock family who immersed himself in the study of Physics. After the death of his parents in what seemed to be a laboratory accident, Brian takes a fellowship at Darkmoor nuclear research centre. When the facility is attacked by the technological criminal Joshua Stragg a.k.a. "The Reaver", Brian tries to find help by escaping on his motorcycle. When he crashed his bike in a nearly fatal accident, Merlyn and his daughter Roma, the Omniversal Guardian, appear to the badly injured Brian.

They give him the chance to be the superhero Captain Britain. He is offered a choice: the Amulet of Right or the Sword of Might. Considering himself to be no warrior and unsuited for the challenge, he rejects the Sword and chooses the Amulet. This choice transforms Brian Braddock into Captain Britain. However, Brian is only one member of a much larger, inter-dimensional corps of mystical protectors collectively known as Captain Britain Corps.

Braddock then defeated Reaver, who had chosen the sword, and fought against many villains, such as Vixen, Hurricane, Mastermind (Computer), and many others. In addition, he would help Captain America fight Red Skull, and later partner with Spider-Man on night patrols in America. Unbeknownst to Braddock, he had been Spider-Man's roommate in Empire University, who was actually Peter Parker (who eventually realized that Braddock was Captain Britain).

Braddock continued his adventures, eventually having to save Camelot from Mordred and Necromon, but was killed during the battle. He was resurrected by Merlin, and partnered with Dave Whitman (Black Knight), who would later aid him when they became the Grandmaster's Contest Champions. His sister's death caused the Captain to fall into alcoholism, and was only returned back to his normal state when Nightcrawler needed his help. After defeating Technet to save Shadowcat and Meggan, he formed Excalibur with the other mutants.

Kelsey Leigh is the second Captain Britain, who is chosen when Brian was in Otherworld. She is a single mother of two children and was a schoolteacher who taught English literature and history. Back when she was married, she was sexually assaulted by thugs who invaded her home. The incident caused her to divorce her husband (as he was too paralyzed with fear to help her) and to take sole custody of their two children.

One fateful day, her family found themselves on the front line of a battle between The Avengers and the Wrecking Crew. When Captain America and The Wasp were knocked unconscious, Kelsey took the captain's shield and selflessly protect Cap and Wasp from Thunderball's attack. Despite blocking the blow, the impact caused her severe internal injuries and she died en-route to medical facilities.

Kelsey awoke to find herself in a ring of standing stones, where she was met by a vision of Brian Braddock, ruler of Otherworld at the time, and his wife, the shapeshifting mutant Meggan. Brian passed the mantle of Captain Britain to Kelsey. Her heroic act of bravery had earned her a second chance to live and to defend her home. She's given the choice between the Sword of Might and the Amulet of Right.

Desperate to see her children again, and not seeing how a necklace could defend anything, Kelsey, unlike Brian before her, chose the sword, the path of violence. Instantly, she was transformed into the new Captain Britain. After Brian returned from Otherworld to Earth, Kelsey renames herself as Lionheart. 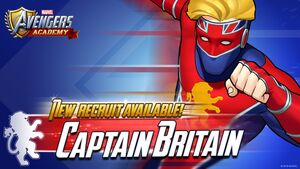 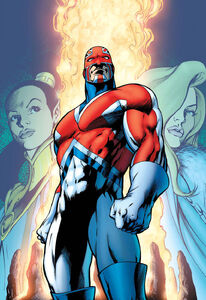 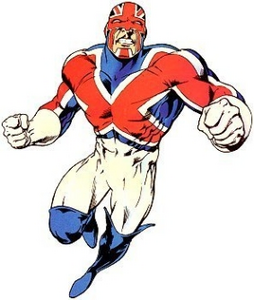 Retrieved from "https://hero.fandom.com/wiki/Captain_Britain?oldid=1610543"
Community content is available under CC-BY-SA unless otherwise noted.