Margaret Elizabeth Carter, better known as Captain Carter, is a supporting character in the 2022 film Doctor Strange in the Multiverse of Madness.

She is a war hero and member of the Illuminate on Earth-838. After getting enhanced by the super soldier serum, she met Strange of her reality and became a member of the Illuminati alongside Captain Marvel, Professor X, Black Bolt and Mister Fantastic. The team worked together to stop Thanos from wiping out half of the universe, but Supreme Strange allowed himself to be mercy killed due to causing an incursion. During the trial against an alternate version of Doctor Strange, she was killed by Scarlet Witch.

Like her original version she was portrayed by Hayley Atwell.

Not much is known about this version of Peggy Carter's past, but it's presumably similar to her main counterpart as a SSR agent who was given the super soldier serum during the Second World War. In modern day, Captain Cater became a member of the Avengers, and was due to her heroism from the past war, was given the title of "The First Avenger". At some point, Strange Supreme offered her a position in the Illuminati alongside the mutant telepath Professor X, the brilliant scientist Mr. Fantastic, the cosmic defender Captain Marvel and the Inhuman Black Bolt.

When Thanos commenced his plan to obtain the infinity stones to wipe out half of the universe, the Illuminati tried to fight efforts to stop his campaign. During the war, Strange used the Darkhold to seek other methods to stop him across the multiverse, but instead caused an incursion that resulted in countless deaths. The Illuminati eventually defeated the mad Titan on his home planet by using the Book of Vishanti, but Strange revealed his previous actions and allowed Black Bolt to execute him. Following this, the group covered the event by telling the public he died during the final battle against Thanos. Additionally, they decided to recruit Karl Mordo into the group by making him the new sorcerer supreme.

Carter and the Illuminati were called upon the arrival of an alternate version of Strange, whom was put on trial as the council believed he was dangerous. Upon meeting the sorcerer, Carter became irritated with Strange's arrogance, throwing her shield towards him when he refused to show respect to Black Bolt. During the trial, Scarlet Witch arrived by dreamwalking into her Earth-838 counterpart to obtain another copy of the Darkhold. Carter attempted to stop the witch during the battle, but was cut in half when Maximoff threw Peggy's shield back at her. Excluding Mordo, every member of the Illuminati met their end by Scarlet Witch, who was eventually defeated by Doctor Strange and America Chavez.

Captain Carter on the council. 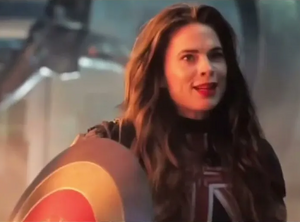