She is a variant of Peggy Carter who took the Super Soldier serum instead of Steve Rogers, becoming a superhero to fight HYDRA. She would sent to the twenty-first century, where she became an agent of S.H.I.E.L.D. and was later recruited into the Guardians of the Multiverse to stop Infinity Ultron from conquering the multiverse.

Like her original version, she is portrayed by Hayley Atwell, who also played the 838 counterpart in Doctor Strange in the Multiverse of Madness.

Margaret Elizabeth "Peggy" Carter's history is similar to her sacred timeline counterpart, being born in the 1920s to Harrison and Amanda Carter, and being the sister to Michael Carter. When the Second World War occurred, Carter joined the British Army before being recruited into the Strategic Scientific Reserve.

While the majority of the events leading up to the serum test stay the same, the changes begin when, at the serum test, Peggy opts to watch from the main theatre instead of the observation room. Heinz Kruger detonates his bomb next to Abraham Erskine, instantly killing him and interrupting the test, and shoots Steve Rogers as he is exiting the pod. However, Peggy shoots Kruger dead, and enters the pod herself, being injected with the serum and gaining superhuman strength and resilience. Despite the objections of Colonel Flynn, Peggy retrieves the recently-stolen Tesseract from HYDRA, with Howard Stark using it to build Steve's "HYDRA Stomper" suit, while Peggy takes up the alias of "Captain Carter".

Carter, Rogers and the Howling Commandos continue to battle both Nazi and HYDRA soldiers over the span of the war, and form a romantic bond over time. However, HYDRA's leader Red Skull, who seeks to use the Tesseract to summon a extraterrestrial beast to win the war, tricks Carter and the team into raiding a train full of dynamite, with the resulting explosion seemingly killing Rogers.

Distraught and vengeful, Carter decides to launch a direct attack on HYDRA's base. There, they find both Rogers being held prisoner, and Red Skull using the Tesseract to successfully summons the beast. However, it instead kills Red Skull and starts to destroy the base. Despite the team's best efforts, they are unable to close the portal, and Carter is forced to push the beast back in, being pulled into the portal herself and disappearing from Earth for seventy years.

Carter is transported to the year 2012, having likely defeated the beast. She is met by Nick Fury and Clint Barton. Carter is saddened to learn that she has returned long after World War II's end, believing Rogers to be long dead by now. She would become an agent of S.H.I.E.L.D., and would battle against Batroc. During her battle against him, she saw Uatu the Watcher in the sky, who informed the agent that she had been chosen to join the Guardians of the Multiverse.

The Watcher explained to Carter and the others that Infinity Ultron was preparing to conquer the universe, as he managed to obtain the Infinity Stones and wipe out his universe. Joining with T'Challa, Doctor Strange Supreme, Gamora, Prince Killmonger, and Party Thor, Carter battled Infinity Ultron in stopping the rogue A.I. from destroying the entire multiverse. Upon their victory, Killmonger betrayed the group and obtained the Infinity Stones. He was put into a standstill by Arnim Zola, and the two were entrapped in a pocket dimension by Strange Supreme. After stopping Ultron, Carter returned to her universe and learned that the HYDRA Stomper armor was discovered with someone in it.

While her physical appearance is mainly the same as her original counterpart, she becomes much taller and more muscular after being injected with the Super Soldier serum. As Captain Carter, she wears a armored bodysuit with the pattern of the Union Jack, with her vibranium shield showing a similar pattern.

Much like her main timeline counterpart, Captain Carter is brave and not happy with gender discrimination. Proof of her good heart is that Erskine's serum gave her the same result as Steve in the main timeline.

Just like her main counterpart, Peggy still loved Steve; respecting his choice to join the war in Howard's HYDRA Stomper armor. Even when she arrived in the 21st century, Peggy held a torch for him, and was shocked to discover the HYDRA stomper armor when she returned to her universe. 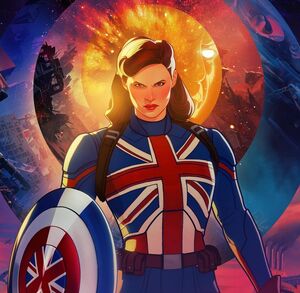 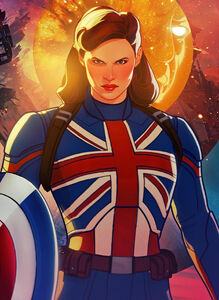 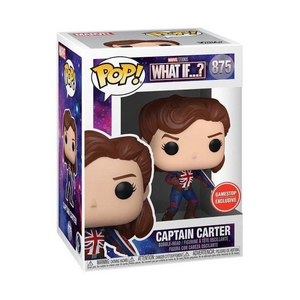