Leader of the Teamo Supremo

???
Captain Crandall is one of the main protagonist of the TV show, Teamo Supremo. He is the leader of the superhero team of the same name.

He was voiced by Spencer Breslin.

Captain Crandall is the leader of Teamo Supremo, who believes that he is an alien superhero from another planet. He is often addressed as "Cap" by his teammates, and his battle catchphrase is "Buh-Za!". In later episodes, Crandall's seemingly imaginary superpowers and backstory seem to actually become canon. In the finale, he experiences a sudden burst of superhuman strength and defense. Also, his skin turns purple when he gets very angry. His gadgets include a special Level 7 belt, as well as a yo-yo, marbles, a boomerang, and a shield. 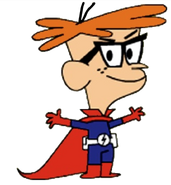 Add a photo to this gallery
Retrieved from "https://hero.fandom.com/wiki/Captain_Crandall?oldid=2189947"
Community content is available under CC-BY-SA unless otherwise noted.