Avenge Princess Clara's death (formerly).
Erase himself as well as his housemates from existence by successfully completing the Network Head's plan (succeeded).

Captain Hero is a main character of Drawn Together.

He was voiced by Jess Harnell.

He is a Sociopathic, chauvinistic, perverted, antiheroic, heteroflexible, and lecherous parody of Superman (and other superheroes), with a visual style taken from the cartoons of Bruce Timm and Max Fleischer. Most of his humor revolves around his perverse sexual tastes, his tendency toward violence, or his stupidity; there is also a running joke in which he is heavily suggested to be pansexual and interested in necrophilia. Among reality TV archetypes, he represents the macho egoist. In original artwork before the show's release, Captain Hero wore tights, and his suit was slightly darker in color and had a different symbol on it. Of all the housemates, Captain Hero saw the most character development over the series.

In the first season, Hero was a simple character with a fairly minor role on the show; he was introduced in the first episode as simply "another person in the house", and as Harnell puts it, his personality was that of an "overgrown frat guy" whose libido was his main source of humor. Over time, however, he grew considerably more complex; consequently, his role was expanded to the point where he became the most frequently used on the show. "The Other Cousin" was the first episode to focus on Hero, but it was the second season episode "Little Orphan Hero" that proved to be a major turning point for the character. In the episode, Hero, after suffering a nervous breakdown, meets his parents for the first time and sees many long-dormant emotional issues rise to the surface. Subsequent episodes would expand on these developments. By the time of "A Very Special Drawn Together Afterschool Special", it seemed perfectly natural for Hero to be cast in the role of the sensitive and caring (if overly emotional) nurturer.

Captain Hero has not been seen doing many activities commonly associated with superheroes. He has an "arch nemesis" who is a parody of Lex Luthor, whose "villainous" activity always involves tricking Hero into washing his testicles in which he says each time "Your balls are clean". He is able to fly (although many jokes involve him not using that ability or it not working as expected) and punch through walls, laser vision (which he used in very few episodes), and once used his "Hero shield" (which involved using an innocent woman to shield himself from bullets).

Despite his questionable abilities as a superhero, the world has seemingly been very dependent on Captain Hero to save the day, as it is a common sight to see news reports on disasters and the comment "Captain Hero, where are you?!" According to Harnell, Hero's most recognizable line is “save yourselves!” When ever there is trouble, he takes off and leaves those who he had left behind to die. 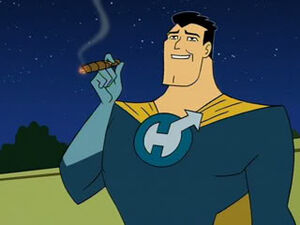 Retrieved from "https://hero.fandom.com/wiki/Captain_Hero?oldid=2192914"
Community content is available under CC-BY-SA unless otherwise noted.