Captain Jack Harkness, The Face of Boe, James Harper, The Man who Can Never Die

"Captain Jack Harkness" was the alias adopted by Time Agent and con man Javic Piotr Thane from the 51st century who became an associate and occasional companion of the Doctor. He was made immortal when Rose Tyler, using the power of the Time Vortex, revived him after he was murdered by a Dalek. He would eventually become the leader of Torchwood Three, and later the entire Torchwood Institute.

He is portrayed by John Barrowman.

Jack Harkness' personality was willfully enigmatic. He enjoyed his persona of "mysterious time traveller", much of which remained constant in his experiences with Torchwood and the Doctor. Before being cursed with immortality, he was a flippant former con man who loved adventuring with the Doctor and seducing beings throughout the universe. Jack automatically flirted with most people he met, not caring about their gender or if they were human, alien or even robots. The Doctor often told him to stop and Jack would often reply, "I'm just saying hello". But as the Doctor pointed out, "For you, that's flirting".

Besides being a flirt, Jack was a drinker. He once remarked that on one occasion when he was sentenced to death, he got drunk and ended up in bed with both his executioners. He told Rose that he preferred to discuss business while he was drinking. Jack claimed to the Ninth Doctor that before he met him he had been a coward and said that he might have been better off that way.

Despite the fact that he was incapable of dying even if he wanted to, Jack retained a sense of humour, frequently telling jokes and being lively and cheerful. However, underneath his cheerful demeanour, Jack was unsure if he wanted to die or not. Living forever (or at least as near to forever as a human could live) brought him to an existential viewpoint. While he joked about grey hairs and remained silent about mortality, Jack saw death as the ultimate end of being; there was no afterlife and no one waiting for him from his past lives. Jack expressed annoyance at people in the 21st century being unable to figure out that aliens exist, believing the Sycorax invasion on the Christmas of 2005 and the Battle of Canary Wharf were more than enough proof that they did.

Despite his friendly and flirtatious nature, Jack could also be ruthless at times and did not hesitate to kill anyone or anything that he felt was a threat. He was also equally unwilling to do anything that could endanger the Torchwood facility. This sometimes got him into trouble with his allies who disapproved of his lack of compassion. An example of this was when he tried to force Ianto Jones to execute his girlfriend Lisa Hallett, who had been turned into a Cyberman, instead of letting someone else do it. He reasoned that the entire thing was Ianto's responsibility and even threatened to kill them both if he didn't do it, causing Ianto to say "You like to think you're a hero, but you're the biggest monster of all". Another example of his ruthlessness was when he refused to open the Rift despite it being their best chance to change everything back to normal, even insulting the rest of the team when they attempted it. This caused Owen Harper to shoot him because he felt that Jack didn't care about what they had lost. Because of these incidents, the entire team was surprised by Jack's desire to save the Cash Cow, with Gwen Cooper going so far as to imply she thought he didn't have a heart. Indeed, although he could be aggressive, Jack still cared deeply about his allies and was devastated when any of them were harmed or killed.

Always a vocal, unreliable narrator of his own adventures, Jack was as much of a mystery to the people he met as the countless lives he claimed to have led. Jack continued to protect himself with an air of mystery. No one he encountered knew his real name or many details about his career or life. He often told anecdotes about his sex life, but no one knew how many were real. Though he professed "responsibility" as his motto after the Year That Never Was, the utter devastation Jack experienced in the space of five days over the course of the 456 incident and the deaths of his grandson and Ianto Jones left him wracked with guilt and grief, unable to remain on Earth. When he returned to Earth, Jack seemed to be a shadow of his old self because he had lost so many people he cared about, although he had recovered enough to stay on Earth in order to defend it.

Jack was haunted by the loss of his younger brother Gray and spent many decades searching for him. He blamed himself for Gray's disappearance because he'd let go of his hand when they were fleeing from aliens during their childhood. Jack loved his brother deeply and, even after Gray turned against him, Jack told him that he forgave him. However, Gray refused to give him absolution and Jack had no choice but to chloroform him and seal him in the cryo-chambers. John Hart insisted that killing him was the only option, believing that Gray would never recover form the trauma, but Jack refused, believing that there had been enough death.

Jack is eternally; tall with a muscular built, and a strong and commanding presence, he is extremely intelligent, charismatic, eloquent and attractive; with flawless smooth skin, perfect black hair and white teeth, a compelling voice. He is very "well-endowed", with endless libido, virility, vigor, and vitality, he also possessed superhuman pheromones which makes him naturally nice-smelling, irresistibly attractive, and sexually arousing to others. He possesses innate seductive skills and charming allure which he uses to passively and efficiently to seduce and manipulate anyone of either the same, opposite, or entirely different species of sex. He has irresistible level of charm. He intuitively has an encyclopedic knowledge in sexual and carnal techniques, allowing him to invoke a specific type of sexual fulfillment in a specific sexual partner. He can induce pleasure in someone who is not expecting or desiring it, as well as create, induce, or reveal new desires that the partner never even realized they had, such as when he seduced Ianto, and Angelo into a relationship, whereas both of them were heterosexual. This results in absolute satisfaction for any partner,

Jack is a true immortal, a fixed point in time, he possesses absolute immortality, he is unable to die, age, get sick, or be permanently wounded. He is absolutely one of a kind, he cannot be replicated, cloned, mimicked, copied, etc.  Every time he dies, or is killed by any means, he will inevitably return to life no matter what. He could die and come back to life almost instantly, although on occasion his resurrection was delayed if he experienced enough trauma. This would cause his body to deteriorate from the slow healing, such as suffering the pallor of a corpse. He heals by automatically erasing the damages from existence. He can regenerate fully destroyed limbs or body parts, recover his life-force. Each time Jack came back to life, he would awaken with a very deep gasp of breath as his respiratory system resumed its functions.

An interesting side effect, used only once on record, was the ability to use his temporal healing on another being, allowing that person to recover very quickly. He could also re-grow his whole body. After a bomb that was planted in his stomach exploded, he was able to fully regenerate from just an arm, a shoulder, and part of his head in a bit over twelve hours. His bones grew back first, followed by his internal organs, and lastly his skin, and it would appear that he perfectly retained all his memories and knowledge. The process of resurrection could be painful, especially in this instance. He regained consciousness before his healing was complete, with his eyes and his flesh yet to regrow, but the ability to feel pain intact, causing Jack to scream for hours on end and hold extreme resentment to those who planted the bomb inside him. Jack apparently underwent a similar experience in 2007 after his body was destroyed after being thrown out of an airplane at 30,000 feet over Chernobyl and he subsequently reconstituted after most (but not all) of his body parts were recovered; however, due to exposure to a form of retcon gas, he lost all memory of this. He is very durable and is able to endure heat and radiation which would burn or vaporize others, without harm or pain. Jack viewed this power as a curse as much as a blessing, as each time he died he did not experience anything at all, good or bad, although the process of resurrection was described as being "hauled over broken glass." Notably, although Jack quickly recovered from fatal injuries, he did sustain more minor wounds such as a cut lip or a black eye and retain them for a while after the injury was inflicted, demonstrating that his immortality was just that. These wounds healed much more quickly than the average human's, and were usually gone within a day or so.

The Tenth Doctor explained to Jack about his power after their reunion: Rose, as the Bad Wolf entity, resurrected him and brought him back forever. The Tenth Doctor said that Jack was a fixed point in time, an impossible thing which was troublesome to look at, even the TARDIS tried to get rid of him. The Doctor said that he was unable to undo Jack's immortality, and resurrection power, and Jack would never truly die.

Tosh could not read his thoughts, although he could project thoughts to Tosh if he so chose. Jack confirmed that he was immune to mental manipulation, but he knew someone was trying to read his mind. Jack could make himself unnoticeable at will. Jack can speak, read, write, understand and communicate in any language fluently.

Jack had enhanced abilities as such, he was always in perfect physical and mental condition and a natural expert and instinctively proficient in all weaponry, especially firearms. He was physically strong enough to rip the bolts of chains he had been bound with by the Master out of the wall. He possesses extremely sharp senses, lighting-fast reflexes and flawless accuracy, such as when he noticed and accurately fired on a Dalek instantly after teleporting from Cardiff to London at night without even looking. He is a natural fighter, capable of easily taking out several trained soldiers and CIA bodyguards without assistance and within moments, and successfully tackled and pinned Angelo Colasanto. He even went toe to toe with fellow time agent John Hart.

He possess perfect memory, he can remember and recall everything that he has ever experienced, encountered or learned in his lifetime. He needs only to read, hear or see something once and he will never forget it. His mind has unlimited storage capacity, and he is able to immediately recall any information he has stored with perfect clarity. His memories remain intact even if his brain is completely destroyed. He has unparalleled leadership skills due to his ability to see the variables of any situation and predict the outcome of an event. His immortality extends to his mental and emotional capacity, he gets over deaths and tragedies, and does not feel guilt, after killing who knows how many, he is shown living a carefree life free of mental exhaustion for centuries. 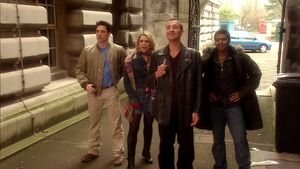 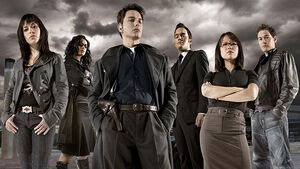 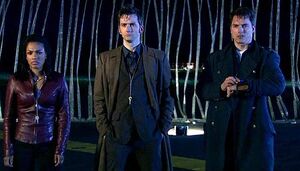 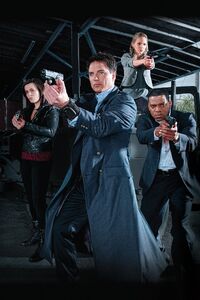 Retrieved from "https://hero.fandom.com/wiki/Captain_Jack_Harkness?oldid=1982071"
Community content is available under CC-BY-SA unless otherwise noted.