Hanging out with Barf

Get 1,000,000 spacebucks to pay off Pizza the Hutt (abandoned)
Stop the Spaceballs from destroying Planet Druidia and stealing their air (succeeded)

Captain Lone Starr is the main protagonist of Spaceballs. He is portrayed by Bill Pullman, who also portrayed Dr. James Harvey and Thomas Whitmore.

He combines traits from Star Wars two male heroes, Han Solo and Luke Skywalker. His name is derived from Isaac Asimov's Lucky Starr series and the "Lone Star State" of Texas, as well as being a parody on the last names of the two heroes of Star Wars, Solo (Lone) and Skywalker (Star). He hails from the Ford Galaxy, in reference to Harrison Ford (who played Han Solo), and also a play on the Ford Galaxie, a car made by the Ford Motor Company. Lone Starr's costume is intentionally misplaced, resembling a Colonial Warrior from Battlestar Galactica and Ford's Indiana Jones costume (he is seen wearing a cowboy hat in his first scene, which is set aside and not seen for the remainder of the film) rather than that of Han Solo or Luke Skywalker. Much like Solo, he is accompanied by his furry sidekick Barf in all of his appearances. 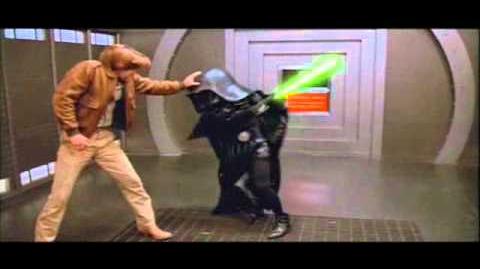