Captain Marvel, Jr. (real name Frederick Christopher "Freddy" Freeman), also known as CM3 and Shazam, Jr., is a fictional character and superhero that originally appeared in Fawcett Comics, and currently appears in DC comics. He is known to be the best friend of Billy Batson, better known as the superhero Captain Marvel and later Shazam in the current DC continuity, and the archenemy of the supervillain, Captain Nazi.

Freeman was a high school student who would suffer from severe injuries after being attacked by the supervillain Captain Nazi, but was rescued by Captain Marvel and was granted the same powers by the Wizard Shazam. Becoming "Captain Marvel, Jr.", Freddy served as the third member of the Marvel/Shazam Family to stop threats.

He would take on the mantle of "Captain Marvel" from Batson after he completed the trials of Shazam. In the New 52, Freddy is depicted as a foster child after his parents were sent to prison, and becomes a superhero alongside his foster siblings. He has also been a member of the Justice League, the Teen Titans, the Outsiders, the New Young Justice, and the Titans Los Angles.

He was created by the late Ed Herron and the late Mac Raboy, and first appeared in Whiz Comics #25 in December of 1941.

The character has appeared in numerous media outside of the comics, such as in the DC Extended Universe, where he is portrayed by Jack Dylan Grazer and Adam Brody.

Much of Freddy Freeman's origins on New Earth are similar to his background from Earth-S, with some alterations, such as having a brother named Kit Freeman. Frederick Christopher "Freddy" Freeman is the son of David and Rebecca Freeman, and went on to become a successful student at Binder High School. Freeman was among the most popular students at Binder, and was the archetype of a high school jock.

He became the best friend of Billy Batson, a WHIZ Radio reporter and who was also secretly the superhero "Captain Marvel". At a spelling bee at the WHIZ radio station, Freddy and Billy met Mary Bromfield, and learned that she is actually Billy's long lost sister. Freddy helped Billy reconnect with his sister, but fell in love with Mary at first sight.

Angered at his grandfather's death, Freddy attacked Captain Nazi with the powers of Shazam, and the supervillain was taken to jail after Mary calmed Freeman down. After stopping Captain Nazi, Freddy was inducted into the Marvel Family, where he learned that Billy and Mary were granted the same powers.

During a falling out with Billy, Freddy decided to leave the Marvel Family and began a new life in New York. He would run across the Teen Titans, a superhero team and became a member where he saved Chain Lightning from a suicide attempt. Captain Marvel, Jr. became romantically interested in Argent, but after a bad date, he abandoned it. Freddy also started to go by the alias "CM3", meaning "Captain Marvel Three", to differentiate from Billy and Mary and identity himself when changing. Freddy would later leave the Teen Titans and joined the Outsiders, but didn't like the team's darker tone and left during the "One Year Later" storyline. When the Wizard Shazam was killed, Freddy and Mary lost their powers, and would have to go through the trials of Shazam to receive the powers.

Freddy managed to pass the trails of Shazam and received all of Batson's powers and stop the sorceress Sabina, and took on the mantle of "Captain Marvel". Freddy would join the Justice League under the leadership of Green Lantern (Hal Jordan) and Green Arrow, but was captured by the supervillain Prometheus as he took on Freddy's guise. During the "Final Crisis" storyline, Captain Marvel, Jr. worked with Black Adam to battle against Darkseid's forces. Black Adam then tried to kill Mary, who was under the of Desaad until Freddy had her freed by calling the powers of Shazam. Freddy was later betrayed by Osiris, who took his powers.

On Prime Earth, Freddy's parents were criminals who were sent to prison, leaving their child an orphan who was thrown into foster care. He grew with a lame leg, leaving unable to normally walk and was later adopted into the Vasquez family by Victor and Rosa. Freeman became the adopted brother to Mary Bromfield, Darla Dudley, Pedro Peña, Eugene Choi, and later Billy Batson. Freddy and his adoptive siblings would become superheroes when granted the powers of Shazam, which allowed Freddy to walk in his adult form. He became known as "Shazam, Jr." or "King Shazam", and became a member of the Shazam family under the leadership of the Wizard Shazam and Batson. During the "Doomsday Clock" storyline, Shazam, Jr. was among the many superheroes called to battle against Doctor Manhattan on Mars. 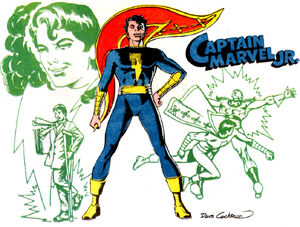 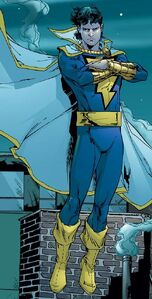 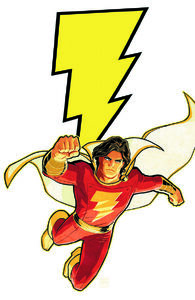 Freddy as the new Captain Marvel. 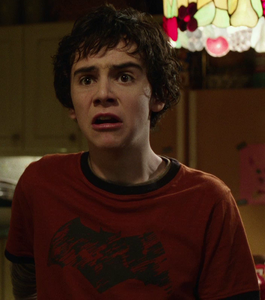 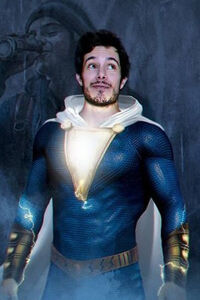