She is an officer of the U.S. Air Force who came into contact with the Kree, and exposure to the energies of a Kree weapon merged her with Kree DNA, transforming her into a Human-Kree hybrid. She became the superhero Ms. Marvel who later became Captain Marvel and became an Avenger after the team decides to expand.

She is voiced firstly by Roscoe Handford as Ms. Marvel, but due to her being popular other actresses took up to voice Ms. Marvel like April Stewart in Ultimate Alliance then Jennifer Leigh Hale in Earth's Mightiest Heroes as time went on however Erin Grey Van Griffin Oosbree Delisle voiced her in Superhero Squad Show plus game tie in but by the time Captain America promoted Ms. Marvel to Captain Marvel Erin Grey Van Griffin Oosbree Delisle took up the offer and voiced again from Adventures to Guardians of the Galaxy TV show so when Marvel Rising came in including Captain Marvel's debut film outing things went crazy from there so they hired another 2 actresses to voice her once more 1 for the Marvel Rising under Kimberly Jayne Kims Raver & another in live action film under Brianne Sidonie Brie Desaulniers Larson 17 & 19 respectively. 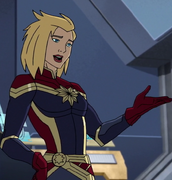 Add a photo to this gallery
Retrieved from "https://hero.fandom.com/wiki/Captain_Marvel_(2010s_Marvel_Animated_Universe)?oldid=2286237"
Community content is available under CC-BY-SA unless otherwise noted.