Control over the Axiom

Get back to Earth (succeeded)

Master of a Villain

Captain McCrea (also known as Captain B. McCrea or simply The Captain) is one of the two tritagonists of WALL-E.

He is voiced by Jeff Garlin in English, and by Masao Kusakari in Japanese dub.

Captain McCrea is a leader of the Axiom. He helps WALL-E and EVE get the plant to the holo-detector energy machine so they can return to Earth. He initially doesn't do much for the ship beyond giving morning announcements, but when EVE comes back "positive" with a plant that WALL-E found there, he suddenly becomes very interested in humanity's former home, and after learning a lot about it from the ship's computer, his main goal becomes to get the human race back to Earth to rebuild Earth. The first objective he needs to accomplish this is to take back the ship from AUTO, his auto-piloted steering wheel that is supposed to assist him in operating and maintaining the ship. However, Captain McCrea discovers that AUTO was essentially controlling the ship for 700 years. He was the one that ended up defeating him and another rogue robot, GO-4. Captain McCrea says to AUTO, "AUTO, you are relieved of duty", as he shuts him off and takes back the ship. He was very happy to be back on Earth. He, WALL-E, EVE, the rest of the good robots, and the human race begin to rebuild Earth. 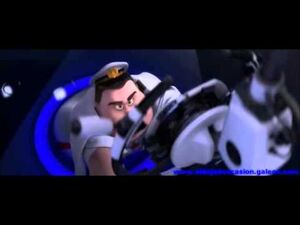 Captain B. McCrea vs. AUTO