Captain Phoebus, Captain, Feeble, Doofus (both referred to by the gargoyles)

The Hunchback of Notre Dame

To save the Notre Dame from Frollo's oppression. (Succeeded)

Phoebus is the husband of Esmeralda, and the father of Zephyr, he is also the tritagonist of Disney's The Hunchback of Notre Dame.

Role in the First Film

He is a soldier who returns to Paris to be Captain of the Guard under Judge Claude Frollo because his predecessor was a "bit of a disappointment" to Frollo. His feelings for Esmeralda are genuine. He first meets Esmeralda when he sees her dancing in the streets for money. He also watches her dance at the Festival of Fools. Both times, he shows a marked interest in her with an approving grin. But both events entail for Phoebus a greater vested interest in Esmeralda's well-being, and not only in her dancing and her beauty, in that he assists her escape from city authorities both times, unbidden by her. Specifically, after witnessing two soldiers harassing Esmeralda over her (honestly acquired) earnings when he first arrives in the city, Phoebus blocks their way with his horse, Achilles, when they pursue her, and stall them long enough for her to get away. The second time, he follows her to the cathedral after Frollo issues an order to arrest her for her defiant acts against him at the Feast of Fools and, when Frollo and a handful of soldiers arrive to arrest Esmeralda, Phoebus takes the initiative and claims sanctuary for her. Notably, his first real encounter with Esmeralda in the cathedral involved an impromptu sword vs. candle-holder fight when she believes he intends to arrest her—he flirts the entire time, if awkwardly, and they eventually reach a place of discourse before being interrupted by Frollo.

Additionally, Phoebus in the film is shown to be a man of principle and integrity, as well as a man with a sense of humor. Throughout the movie, Phoebus expresses disdain and disapproval for Frollo's increasingly unjust acts against the gypsies of Paris. In fact, when first faced with Frollo's intentions for summoning him to Paris, Phoebus openly displays skepticism over being called on "to capture fortune tellers and palm readers." At the beginning of the film, he is disgusted with the treatment of Quasimodo at the Festival of Fools and asks permission to stop it, but Frollo orders him to wait a while because "a lesson needs to be learned here" for Quasimodo's disobedience. It is Frollo's order to burn the home of an innocent miller and his family suspected of harboring gypsies, with the family still inside, which finally prompts Phoebus to rebel against Frollo, cementing Phoebus's "hero" role in opposition of the film's villain. After he is wounded by Frollo's thugs for saving the miller's family and defying Frollo, Esmeralda (who had been watching the events the entire time in hiding) saves Phoebus from drowning when, as a result of his wounds, he falls from his escape horse into the Seine river. She seeks Quasimodo for help and hides him in Notre Dame. He is later arrested by Frollo after he found the Court of Miracles, but manages to escape and rallies the citizens of Paris against Frollo's tyranny. After they defeat Frollo and his thugs (when Quasimodo poured molten lead into the city to protect the church), Quasimodo gives the two his blessing as a couple.

Phoebus returns as a secondary character, and he is captain of the guard again. He and Esmeralda are married and have a son named Zephyr, who looks just like Phoebus but with green eyes like Esmeralda. 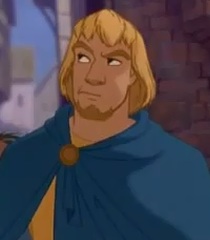 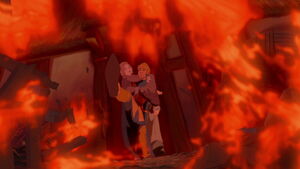 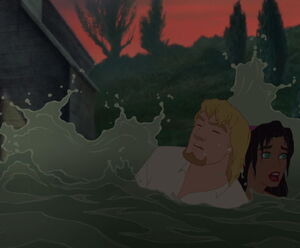 Unconscious and wounded Phoebus saved from drowning by Esmeralda 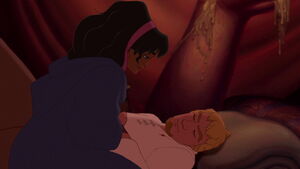 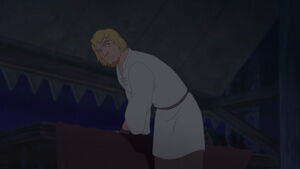 "We have to find the Court of Miracles. Before daybreak." 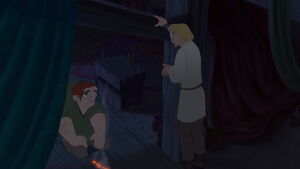 "If Frollo gets there first-" 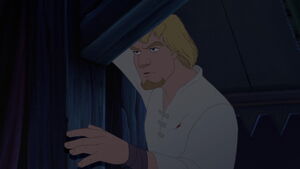 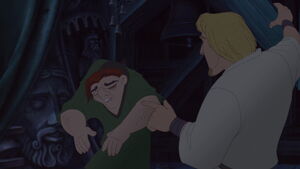 "I thought you were Esmeralda's friend!" (Quasimodo: "Frollo's my master. I can't disobey him again!") 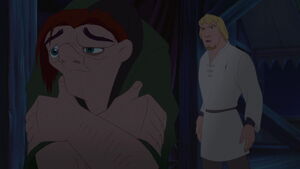 "She stood up for you! You've got a funny way of showing gratitude!" 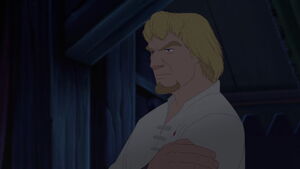 Phoebus, when Quasi refuses to help him warn Esmeralda about Frollo's ambush at sunrise. 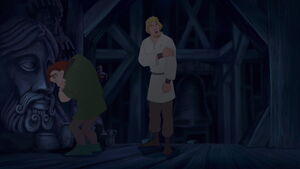 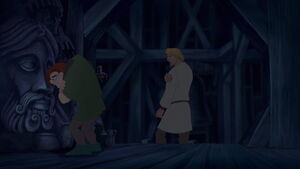 "You do what you think is right." 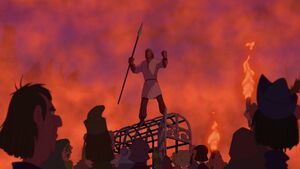 "Citizens of Paris! Frollo has persecuted our people! Ransacked our city! And now he has declared war on Notre Dame herself! WILL WE ALLOW IT?!!? 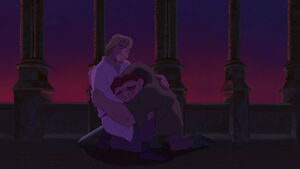 Quasi thanks Phoebus for saving him from suffering the same demise as Frollo. 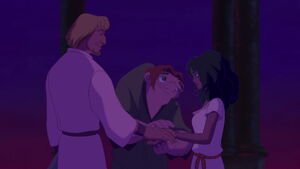 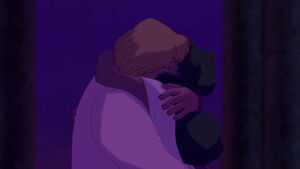 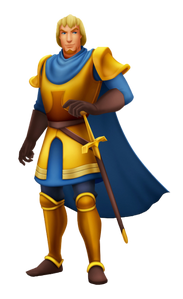 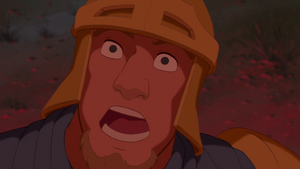 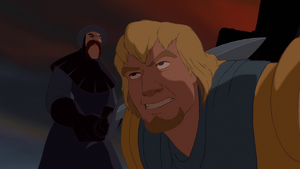 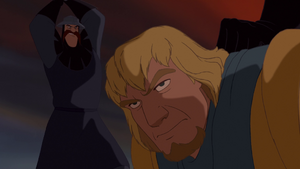 Retrieved from "https://hero.fandom.com/wiki/Captain_Phoebus?oldid=1253683"
Community content is available under CC-BY-SA unless otherwise noted.