Embody all powers of nature

Protect and save nature.

Captain Planet was the main hero of the cartoon series of the same name, he was an environmental-themed hero who was born as part of Mother Earth's quest to stop humanity from destroying itself and the environment - he would be formed when the power of all the rings were combined, the rings represented an element of nature and thus Captain Planet himself represented all the positive forces of nature and it was his job to defend nature from those who would destroy it. He is voiced by David Coburn who voiced Captain Pollution.

Captain Planet displays a wry sense of humor and often makes puns while taunting the show's cast of villains.

Captain Planet's abilities are never clearly defined within the show, allowing him to always have a way of defeating his enemy and solving the problem before him. He can shape-shift and alter his structure to take on the properties of any element or material as well as transmuting other objects in a similar fashion. In various episodes he flies, has great strength, withstands various forces that can kill a normal human, and displays telepathic and empathic abilities.

Captain Planet is weakened when he is in contact with pollution (including mental pollution like hate). Like Gaia, he is bound to the physical realm of Earth. Although he is capable of flying into the orbit, he can’t travel away from the planet. Thus, in one episode he is unable to "return to the Earth" completely as two of the five Planeteers and their rings, Earth and Heart, are stranded in space.

In the beginning of the series, Gaia assembles a modern-day group of young people from several nations. When the modern-day Planeteers combine their powers to summon the elemental warrior, this incarnation takes on the appearance of a superhero named "Captain Planet".

Captain Planet and Gaia don't have much screen-time together, mainly due to her staying on Hope Island while he assists the Planeteers on their missions and/or him returning to his crystal matrix as soon as his work is done. However, when they do interact, they get along well and show that they care for each other. This is best visible by the end of Summit to Save Earth Part II; when the Planeteers summon him to deal with Zarm, Captain Planet first forces Zarm back into his ship, then pauses to give Gaia a hug before proceeding to send Zarm back where he'd come from. 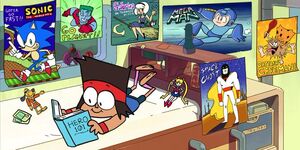 Retrieved from "https://hero.fandom.com/wiki/Captain_Planet?oldid=2210777"
Community content is available under CC-BY-SA unless otherwise noted.