President of Polaris Galaxy (formerly)
Leader of the Q-Force (formerly)

Boasting that he's a hero, running away from danger

He was voiced by Jim Ward.

In Up Your Arsenal, a silhouette looking like Qwark was first seen on Nature's Mysteries, telling the story of the Florana Tree Beast. When Ratchet and Clank arrived at Florana looking for the "Tree Beast", they found the creature with a mask on and his costume torn in some places and what appeared to be a tattoo down his left shoulder.

He accused Ratchet and Clank of "trespassing on sacred ground" and ordered them to walk the "Path of Death".

Once they completed it, Ratchet and Clank tried to get an answer out of the beast, hoping it would tell them about Dr. Nefarious. Skrunch the monkey then pulled off his mask revealing it to be Captain Qwark, apparently having gone mad and suffering from amnesia after retreating to the Florana jungles.

Qwark attacked Ratchet and Clank, who handily defeated him. Qwark then considered Ratchet his new leader after his defeat, following him to Ratchet's ship. The three, along with Skrunch, then squeezed into Ratchet's ship and were contacted by Sasha Phyronix and told to go to the Starship Phoenix, where a custom living area made specifically for Qwark was waiting.

Later on, Ratchet and Clank returned from a mission with a Qwark vid-comic, and played it in front of him to jolt Qwark's memory. While Ratchet and Clank were away on a mission, Qwark took control of the Starship Phoenix from Captain Sasha. He then took the most qualified people he knew that were still on his side and assembled the Q-Force.

Ratchet and Clank went on to defeat the Momma Thyrranoid on Tyhrranosis after taking out the planet's defences. When the fight was over, Qwark arrived just in time with Darla Gratch ready for an interview, taking all the credit for her defeat.

After several more missions, Clank was kidnapped (unbeknownst to the Q-Force) and replaced with Klunk who told them that Nefarious was aboard a ship called the Leviathan, later revealed to be refueling at the Zeldrin Starport. Ratchet, Klunk, Qwark and Skrunch went to the starport and took a Q-Force shuttle to Nefarious' ship while it was refueling.

Qwark claimed, upon arrival, that another of his brilliant schemes had worked and went off on his own to search for Nefarious. Once the four had reached the cockpit, they discovered that Nefarious, who had tricked them, started the self-destruct sequence and teleported away.

While Ratchet, Klunk and Skrunch started to escape, Qwark ran to the Leviathan's dashboard, claiming he saw something he "couldn't leave without" and that he would meet them back at the shuttle. The three escaped without Qwark (on Klunk's insistence), and the cruiser crashed on planet Zeldrin, presumably killing Qwark in the process.

When Ratchet, Klunk and Skrunch returned, the Q-Force gave Qwark a memorial service. Soon afterwards, Ratchet, Clank (who had since been rescued by Ratchet) and Skrunch went to the Crash Site on Planet Zeldrin to look for what Qwark went back for. The three found an escape shuttle with a pocket Crotchitizer (much to Ratchet's disgust), a data disk as well as a recording of Qwark calling for a taxi while dressed as a woman.

When the three returned to the Phoenix they decided not to tell the Q-Force of Qwark's survival until they understood the Qwark's whole explanation. During his time decoding the datadisk, Al found a secret Vid-comic in Qwark's quarters and gave it to Ratchet to play.

It revealed Qwarks Secret HQ on the Thran Asteroid. Ratchet, Clank and Skrunch traveled there and after battling through the waves of Qwark's defenses, they arrived at his quarters, guarded by a forcefield.

After breaking past the forcefield, they found Qwark in his bedroom dressed in his pajamas. Qwark explained that he ran away after realizing he could have died, claiming the universe could not live without Captain Qwark. Then he went on to say that he didn't see what the big deal is if "a few trillion" people get turned into robots. "Who am I to say who should or shouldn't be turned into a robot?"

Enraged and disgusted with Qwark's selfishness and cowardice, Ratchet verbally assaulted him and walked away. Clank, however, stopped and told Qwark that he had a chance to redeem himself before leaving.

Ratchet and Clank later confronted Nefarious and his Biobliterator. After losing in two consecutive battles, Nefarious transformed the Biobliterator into a massive mech-suit.

Qwark flew in on his shuttle to aid Ratchet and Clank. Ratchet, Clank, and Qwark soon defeated Nefarious. Qwark was present at the premiere of the new Secret Agent Clank movie with Skrunch. 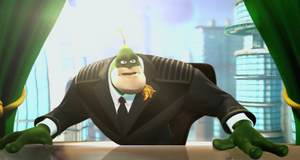 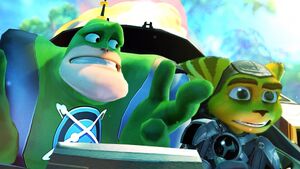 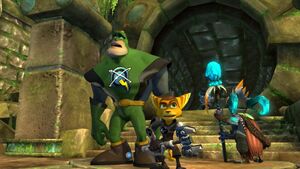 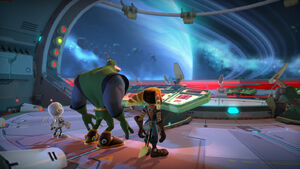 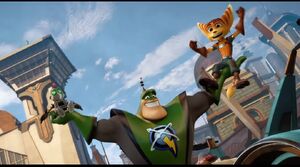 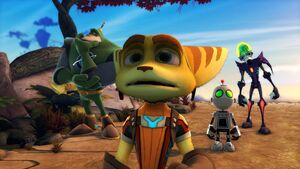 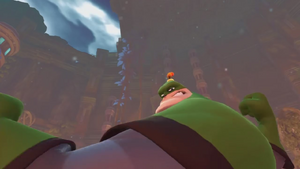 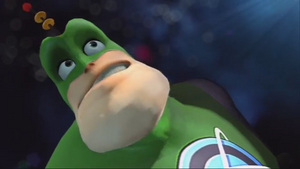 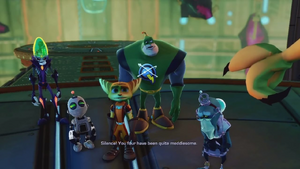 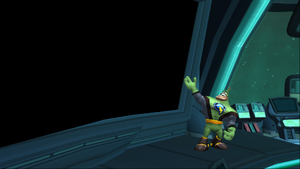 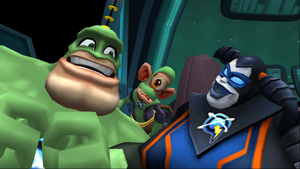 Qwark in his personal hygienator commercial. 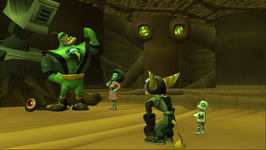 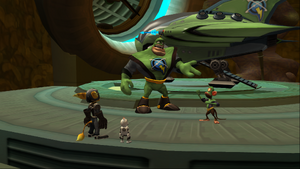 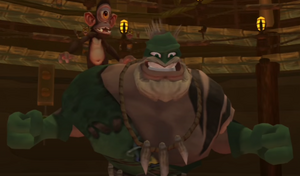 Qwark's first appearance in Up Your Arsenal. 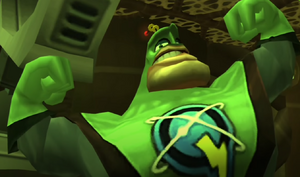 Qwark taking credit for defeating the Momma Tyhrranoid.
Add a photo to this gallery

Retrieved from "https://hero.fandom.com/wiki/Captain_Qwark?oldid=1952678"
Community content is available under CC-BY-SA unless otherwise noted.