Leader of the Boov race.

Stay as the Boov's Captain (formally)
Stop to Oh for sending a invitation to the Gorg and ask him what his password is to stop the invitation, invade Earth and hide from their enemy "The Gorg".

Its main trait is being chicken-hearted, and being celebrated by being said thing. It will retreat from anything, and has incorporated said thing to the Boov culture.

At first he is kind, selfless, insecure, caring, comical, hilarious, meek and sweet but at the end of the film he is murderous, stingy, power-hungry, sly, ungenerous, two-faced and devious.

Not much is known about its life, other than having stolen a device of Gorg's it uses to shut people up, although the device is actually a Gorg egg.

Captain Smek is the leader of a alien race called the "Boov" who are trying to find a place to hide from their enemy, until one of them made a mistake, a Boov named "Oh", Captain Smek sends an Alien Traffic Cop named Officer Kyle to hunt down Oh for what he did. He was the one who stole the egg from the Gorg.

Later Smek goes to Paris and tells them if they found Oh, but one of them lie and gets Smek upset until Kyle tells him that Oh got away with Tip within getting his head hit by Smek's "Shusher", Smek tells Kyle if he got any idea what to do, Kyle suggests that they type in random buttons which doesn't work for only Oh knows it, Smek likes the idea (he likes any idead despite that they are aliens) and tells those smart Boovs to get to work.

Later they find Oh and Tip and Captain Smek explains how dumb Oh by saying he makes many mistakes and thinks it's a game to Oh and thinks he will continue to make mistakes, after Tip turns the "gravity thingy" upside down Smek later escapes in Kyle's flying pod.

After the Gorg attacks the boov, Smek didn't know about the super chip that the Gorg had and Smek was the only one who's thinks he's the super Boov and anyone who holds the "Suusher" is the captain which is what Smek is Oh however mentions to all the boov about how a bad captain Smek is by doing the wrong thing about humans, Smek has finally had enough of Oh and before he can hit Oh with his "Shusher" and Smek becomes powerful.

Kyle forces him to let Oh be captain but Smek refuses and gets hit in the head by Kyle but tells the Boov Oh wouldn't know what to do and thinking he would make more mistake but gets hit by Kyle again and gives the "Shusher" to Oh with Smek getting run over by the Boov and crying on the floor.

In the short film, Captain Smek appears when getting out of his spaceship and announcing to his Boov on arriving at their foster new planet. 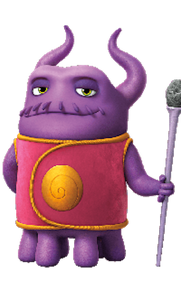