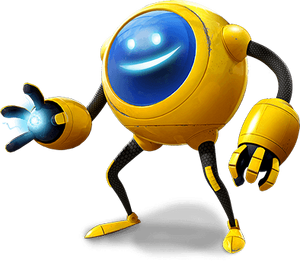 Caramba is one of the main protagonists of Zak Storm: Super Pirate. He is a Wahoolian and part of Zak Storm's crew.

Caramba's vocabulary is very mixed, speaking English but adding snippets of the wahoolian language in his words. He eccentricities leave some things to be desired, but his efforts to hep are always genuine.

In the promotional art, Caramba appears to have some sort of lightning abilities. Through his robotic suit, Caramba can extend his arms to save his friends. Caramba is also a brilliant mechanic and a savant with everything technological. His suit also has two bump-like protrusions on the back, which can open up to reveal tool arms.

Retrieved from "https://hero.fandom.com/wiki/Caramba?oldid=1704607"
Community content is available under CC-BY-SA unless otherwise noted.