Carina is a supporting character from the anime movie Heart of Gold and One Piece Film: Gold. She worked on the thief and later she worked as the singer in Gran Tesoro, its steal to plotting on the riches. During overthrow Gild Tesoro, Carina took command of Gran Tesoro, after helping the Straw Hat Pirates. After the end of the two films, her whereabouts are unknown.

She made a cameo appearance in One Piece Film: Stampede where she tries to win in the beauty contest, but was mad when she lost to Nami.

She is voiced by Hikari Mitsushima in Japanese and Michele Knotz in English.

Carina is a young woman who has a long purple hair with tied up with the chignon, and blue eyes. During in a pool in Gran Tesoro, she wears a white bikini with the star accessory, a star necklace, gold earrings, and a gold armlet on the bicep. When she during the concert, she wears a strapped black and yellow dress with the blue feathery arm-wear and lack stiletto heels. Carina who also wears a pearl necklace and earrings. In the casual outfit, Carina wears a black backless ring neck halter dress keyhole cutout with a cleavage, a red feathered boa and a red flower on her hair. And she meeting with the Straw Hats on the secret, she wears a white button up shirt with suspenders, black short pants and a black hat and brown shoes. And lastly, she wears a leather black spysuit with a blue zipper with black gloves and black boots.

As a teenager, she has a shorter hair, white long-sleeved shirt, a blacks pants and a brown shoes.

Carina is a greedy and devious, who takes the access to steal the treasure and riches. During the luxurious lifestyle, Carina becoming a songstress at Gran Tesoro. She has not satisfied to treating herself to Gran Tesoro, despite organizing the large coup to order from steal it. However, Carina is the legal and rich job who retained on the behavior, disguising to steal Nami's wallet on Gran Tesoro. She seems her thieving skills to be a proud when she questioned who someone actually steal her wallet such as angry and shocked who realized has been stolen by Nami.

Carina's concept art from the anime. 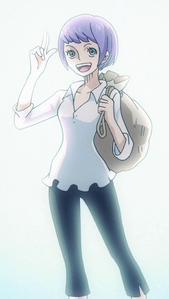 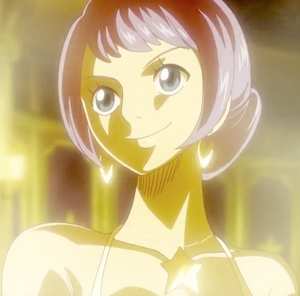 Carina's cameo in Heart of Gold. 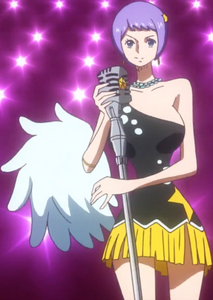 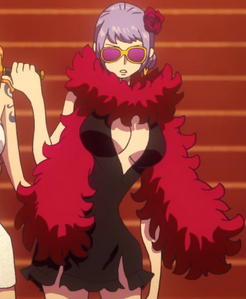 Carina's disguise while reuniting with Nami.