Pirates of the Caribbean: Dead Men Tell No Tales

Find the Trident of Poseidon (succeeded).

Lt. Scarfield
Captain Salazar (deceased)
Davy Jones
Hector Barbossa (until they discover that they are father and daughter)

Carina was left at an orphanage after the death of her mother Margaret Smyth, by her father Hector Barbossa, who left her with the Diary of Galileo, in hopes that she would use the diary to sell and have an easy life. However, Carina kept the diary as she believed her father was a man of science, then she began studying the book and eventually growing to become an intelligent young woman, as well as an astronomer and horologist.

However, it was shown her intelligence was not welcomed by others, such as in Saint Martin, where Carina was accused of being a witch, arrested, and sentenced to be executed. Before her execution, she was visited by a priest in her cell to ask the final words before her execution. Carina says she has nothing to confess but she reveals that she picked the lock, and she escapes from her cell. Carina is chased by the British soldiers until she loses them and goes into an astronomer's shop, where she uses the equipment to study a blood moon for the night.

However, Carina is found by the owner of the shop, and also accused of being a witch for using the equipment. She then meets Captain Jack Sparrow, who was robbing the new Saint Martin bank with crew, when he enters the shop while drunk, then the owner alerts the soldiers that they are in his shop, but Jack helps her escape from the soldiers. Carina then learns that a sailor, Henry Turner, was seeking to find the Trident of Poseidon. She disguised herself as a nun and went to where Henry was arrested so she could learn about the information on the Trident. She disregarded his tales of curses and dead men as nonsense but got some information about the trident.

Carina is a very strong-willed and independent young woman who's quite intelligent for her age and is interested in intellectual pursuits that are considered uncommon for most woman from her time. However, because of this, she is also falsely accused of being a witch, much to her exasperation. Because of constantly dealing with this type of attitude and treatment, Carina doesn't suffer fools gladly and initially came off as somewhat arrogant and frosty, as she believed herself to be superior to Jack and thinks both pirates and most commoners in general are stupid. She also wasn't particularly willing to stick her neck out for others. This is shown when she escaped and swam away from the boat Jack and Henry were in when Salazar and his crew caught up with them since the way she saw it, they were after Jack not her, so she shouldn't have to be in danger just for being in the same place. However, over the course of the film, she becomes more kind-hearted and heroic, especially towards Henry, who she gradually came to care about and bond with, especially over the mutual absence of their respective fathers and drives to find and/or reunite with them. By the end of the movie, they have become a couple, and she also gradually became a friend of sorts to Jack. 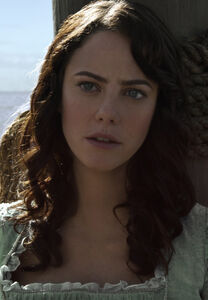