Carl is a minor character in the adult animated movie Sausage Party. He is voiced by Jonah Hill.

Carl is an sausage that he appeared in the first scene called "The Great Beyond".

When he is in the human's house,he only wants to be happy,but his death are like that:

Carl gets sliced by Camile Toh,but he is dead,and Barry saids to him,he is dead. 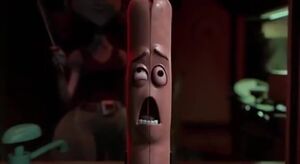 Carl's death
Add a photo to this gallery
Retrieved from "https://hero.fandom.com/wiki/Carl_(Sausage_Party)?oldid=1757199"
Community content is available under CC-BY-SA unless otherwise noted.