The Gridiron Einstein
The Turf Whisperer

I don't need no instructions to know how to rock!Carl Brutananadilewski

Friendship ain't about trust. Friendship's about nunchucks.Carl about friendship.

Carl Brutananadilewski (usually referred to simply as Carl), is one of the main characters of Aqua Teen Hunger Force. He is the unfortunate neighbor of the Aqua Teens, a position that has caused him massive, untold amounts of grief over the course of several years. However, he has his moments of being nice and also begins to openly associate himself with the Aqua Teens more often, rather than going to great lengths to distance himself from them.

He was voiced by Dave Willis.

Carl is a short-tempered, poorly groomed, tacky, vulgar, ignorant and extremely sarcastic person. His interests include pornography, sports and rock. He is shown to be a fan of various rock bands, such as Boston, Loverboy, Foreigner, Judas Priest and Zebra.

While he isn't usually depicted as believing in God, in the season 4 episode "Handbanana" it's implied that Carl might have faith in God, or be an Agnostic, as he says "I don't know if I believe in God, but I think he must hate me. Because he allowed you to create a dog that constantly rapes me!" Carl stated he's Catholic in Carl's Stone Cold Lock of the Century of the Week. 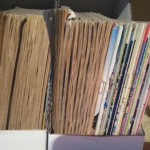