Restore his sister back to normal.

Carl Clover is a hero from BlazBlue who dropped out of the Military Academy. With his sister, Ada Clover now known as Nirvana, they are both vigilantes, and they are two of the strongest. He is voiced by Miyuki Sawashiro in Japanese and Michelle Ruff in English.

A talented young boy and first class vigilante, Carl has brought many criminals to justice with the aid of his mysterious doll Nirvana, which he believes to be his elder sister, Ada Clover. Carl heads to Kagutsuchi to retrieve the bounty for Ragna the Bloodedge. He is a former classmate of Noel, Jin, Makoto, and Tsubaki when they were in the Military Academy, but he dropped out. Carl wants to get revenge on his father Relius Clover, for what he did to Carl's older sister, Ada. In some part of his story, Carl meets Bang Shishigami, and Bang calls him his "cute little disciple".

In BlazBlue: Continuum Shift, he follows Ragna the Bloodedge to find out what he is looking for, and seems to have memories of his sister being destroyed from one of the other timelines. Hazama and Nirvana remember each other from the Dark War, hence the reason she attacks him on sight.

In his Story Mode, Carl has seemingly taken a sort of drug that made him increasingly violent, especially in his pursuit of Relius, turning down even Bang, who has helped him recover after being knocked out by Ragna, and even called him out for attacking Noel out of blue. His pursuit led him to the Librarium headquarters, whereas he encounters Litchi Faye-Ling, presumably after joining NOL. This infuriates Carl even further, as he thought that she's just the same as other adults and his father, discarding their goodness for their own self-desires, and her sincerity is a fake one. After attacking her, the drug's effect wore off, and he started breaking down in tears. However, Litchi managed to comfort him, and restored his self-esteem and view towards adults.

Shortly after, Relius arrived and attacked the two with Ignis as Carl responded even more violently, due to Relius' atrocities on him and Ada. In the end, however, Nirvana teleported both him and Litchi out of the base. Later, Carl left Kagutsuchi to head for Ikaruga, hearing that both his father and Ragna are heading there; thanking both Litchi and Bang for being kind adults (compared to his father); and wished if he grows up, he'll be a kind person like Litchi.

Carl and Ada go to Ikaruga to look for Relius. Carl overhears that he will use Litchi for his "experiments". This is, however, proven false when Relius admits that Litchi's soul was too unstable for any experiments. But even so, Carl remains determined to defeat Relius. On the other hand, he had to avoid the travelling performer Amane Nishiki who wants to draft him into his troupe, taking interest on Carl's youthful look.

Carl is a young boy with light blond hair, a fair complexion, blue eyes and wears jam jar glasses. His typical attire consists of an 1800's, higher class, London-style outfit with long white sleeves, ending in purple cuffs, and purple shorts. These are accompanied with purple military style boots which end in steel toecaps, a gentlemen's purple tophat which covers his head, and a short purple cape which is attached to his body by a metal fixture in the shape of an 'X' and has a sort of cowbell hanging from it.

When he was at Military Academy, he wore the standard male uniform, but with shorts.

When he was very young, he wore purple collar long sleeves shirt with orange tie, black shorts, and brown shoes, which his is shown after Amane Nishiki uses his Astral Heat on him.

Carl has a very professional mindset, and dislikes being treated as a kid. He is always calm and collected, even when staring down a foe.

This, however, is a side effect of Deus Machina: Nirvana. Behind his mature facade, Carl hides an almost crippling dependency upon his sister Ada. He suffers greatly on the inside because he has practically lost his entire family to his father Relius' experiments. From the get-go, the incident with Relius caused him to believe that all adults were liars who would only use him for their own ends. With the help of Litchi, Carl learns that his beliefs are not entirely true, and he overcomes his sorrows. Carl now wants to grow up to be someone like Litchi and Bang - good people who help those in need. It is for this reason that Carl did not condemn Litchi for siding with Relius and NOL, and instead shows concern that she is in danger. 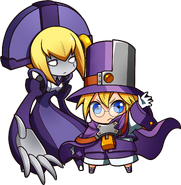 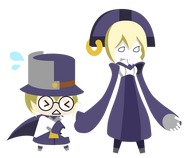 Retrieved from "https://hero.fandom.com/wiki/Carl_Clover?oldid=1926848"
Community content is available under CC-BY-SA unless otherwise noted.