Carl Denham is a director of his films and the former main antagonist of King Kong.

He winds up bringing King Kong to New York City from Skull Island, resulting in him running amok. However, he tries to do right for his mistakes and eventually saves the day.

In the original 1933 film, he is portrayed by the late Robert Armstrong. In the 2005 film and video game, he is played by Jack Black, who also portrayed Dewey Finn in School of Rock, R.L. Stine in Goosebumps, Eddie Riggs in Brütal Legend, Lenny in Shark Tale, and Po in the Kung Fu Panda film series. In the animated musical, he is voiced by the late Dudley Moore, who also portrayed Arthur in Arthur and Arthur 2: On the Rocks.

In the 2005 remake, Denham is less sympathetic and more devious; characterized as a con artist willing to lie, steal and cheat to get his film made. For example, he essentially steals his company's resources to move his filming location to the mysterious Skull Island. Also, after making an inspirational eulogy to a colleague killed by Skull Island natives, Denham repeats the same eulogy for his assistant killed later on by a Venatosaurus. Denham still has moments of courage and loyalty, however, and appears to show genuine affection for his friends (i.e. his assistant Preston, Jack Driscoll and Herb the cameraman). Like in the original, he shows remorse for Kong's death at the end, although it's unclear whether that remorse is due to care for the ape or distress at the destruction of his career though it is possible it was due to both reasons.

In the 2005 film, Denham is a two-bit film director on the verge of bankruptcy and treated with derision by every studio in New York, despite having delivered to them some stunning natural wildlife footage. He and his devoted assistant, Preston, obsessively searched for an actress to cast in his new project, eventually discovering Ann Darrow. Just as in the original, she first believes Denham is searching for a prostitute, but Denham convinces her the job will involve no "funny business."

Denham had obtained a map of Skull Island and opted to produce his next film there. This means abandoning plans to film on set, which had lost him his studio's favor. They decide to take what footage he has and sell it as stock footage to other studios. This drives Denham to steal the equipment necessary to make it to the island. However, he has misinformed his crew that they were heading to Singapore, and only admits the truth to screenwriter Jack Driscoll, who is still working on the screenplay as they set off.

Upon reaching the island, Denham unsuccessfully attempts to establish peaceful relations with the natives by giving a native child a candy bar. The natives attack, two crew members are killed, and this ends up driving Denham and crew back to their ship. That night, Ann is captured by the natives and delivered to Kong. Denham, Driscoll, and other crew members set off in a rescue mission. He films the first dinosaur attack on camera and films the death of a crew member in the swamp in the extended cut (though this was by accident: he was running the camera to see if it still worked, and the last crewman out of the swamp happened to be killed in its line-of-sight). He survives the attack by a Ferrucutus in the extended cut (in which no one dies, but during which some are injured), the manic Brontosaurus stampede, the swamp journey of the extended cut, and the log chasm and insect pit, during which time he loses all the footage he'd been making, causing a brief period of berserker-like fury as he lashes out at the attacking bugs, this ironically being what keeps him alive. Upon returning to the island, Denham is the first of the crew, besides Ann, to see Kong. After surviving many attacks and eventually rescuing Ann, Denham decides to switch his plan from producing a film to capturing Kong and sailing him to New York City after his camera is destroyed in the incident with Kong and the log. He expects to make a fortune showing off Kong, and makes conflicting promises to crew on how he will divide it.

Kong eventually escapes and rampages through New York City, captures Ann and is eventually killed by airplanes. Upon reaching Kong's body, Denham is heard to say that "It wasn't the airplanes. It was Beauty killed the Beast."

The World of Kong, published the same year, elaborates that Denham escapes lawsuits by blaming Kong's rampage on the company that made the chrome steel chains which failed to contain him. Denham returns to Skull Island to lead a scientific expedition in 1935, along with seven successive expeditions for the next decade, escaping before the island is finally swallowed by the sea. 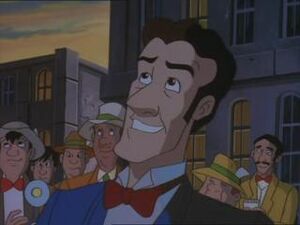