Unusual strength (for his age)

Being with Ellie (formerly)

Chilling with Russell and Dug

Carlton "Carl" Fredricksen is the main protagonist of the 2009 academy award winning Disney and Pixar film Up. He is also the childhood friend and husband of Ellie Fredricksen.

In the Japanese dub, he is voiced by Shōzō Iizuka, who also voiced Dr. Neo Cortex in Crash Bandicoot, Android 8 and Nappa in Dragon Ball Z, Jumba Jookiba in Lilo & Stitch, and Dr. Thomas Light in Mega Man. As a child, he is voiced by Takuto Yoshinaga, who also voiced Flint Lockwood as a child in Cloudy with a Chance of Meatballs and Nemo in Kinect Disneyland Adventures.

Carl was born in 1929, the same year as Ellie. At 8 years old, when Carl watches a movie about Charles Muntz, he gets disgusted that he lost his license for not capturing a legendary bird.

As Carl walks home, he goes inside an abandoned house after hearing a voice inside, which turns out to be a girl his age. The little girl scares Carl by accident, making him drop his helium balloon. She then removes her helmet and introduces herself as Ellie, before accepting Carl into her "club".

After a brief discussion, Ellie takes Carl upstairs to retrieve his balloon, but Carl falls off the plank and his arm is injured. That night, Carl is in bed when his balloon floats into his room through his window, before Ellie climbs inside, scaring him again.

Ellie talks about Charles Muntz and the adventures that she wants to have in the future. After a short stay, Ellie leaves Carl's room through the window, after proclaiming that she likes him.

Carl and Ellie get married at age 19. At the ceremony, Ellie's family cheer loudly, whilst Carl's family give polite applause.

The next day, Carl and Ellie rebuild the abandoned house in which they first met. They spend their life in the park, in the zoo, and saving tips for Paradise Falls.

One day, Ellie found that she was pregnant, and the couple built a nursery room. However, a few days later, they go into the doctor's office to discover that Ellie had a miscarriage, and the doctor knows that Ellie is now sterile.

Years later, their hair turn gray and they start to slow down. Unfortunately, after they finally get a ticket for the Paradise Falls, Ellie, due to her old age, falls sick and dies in the hospital. In the aftermath, with the funeral flowers next to him, Carl returns to his house without Ellie.

Some time later, Carl looks at a construction site in the background. Construction worker Tom says to him that it is a good day. He tells the worker's boss that he can have his house when he's dead.

Carl then meets Russell, who is reading about being a wilderness explorer. Later, Stevie almost broke Carl and Ellie's mailbox. Carl hits his forehead with his cane. While Carl watches TV, he is bleeding and taken to the hospital. Carl is taken to the courtroom for mistreating Stevie. Officer Edith says that his new home will be in the retirement village.

The next day, George and A.J meet Carl and ask him if he is ready to go. However, being determined to keep his promise to Ellie go to Paradise Falls, he's revealed to have turned his house into a makeshift airship using thousands of balloons. The house floats away and all appears to be going to plan until he discovers that Russell happened to be on his porch when the house lifted off the ground, and has become an accidental stowaway, which forces him to take him with him.

When Russell stows away on board, Carl gradually learns from his new friend that adventure is not from the places you go, but from the friends you make and the everyday experiences you have with them.

Ellie and Carl as children.

Ellie watches Carl walk across the board. 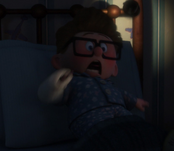 Ellie and Carl on their wedding day.

Carl and Ellie read together.

Carl in the hospital.

Ellie and Carl in their late years.

Carl's stubborn breakdown after Charles Muntz and his fellow talking dogs have escaped with Kevin. 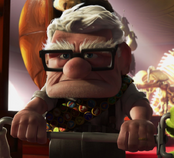 Carl standing up to his childhood idol, Charles Muntz.

Carl Fredricksen has an idea?

Carl with his cane

Carl at the jungle?

Carl sit down and check on Ellie's Adventure Book?

Carl Sitting Alone in the House?